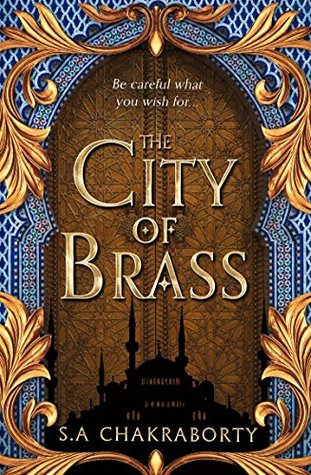 Among the bustling markets of eighteenth century Cairo, the city’s outcasts eke out a living swindling rich Ottoman nobles and foreign invaders alike.

But alongside this new world the old stories linger. Tales of djinn and spirits. Of cities hidden among the swirling sands of the desert, full of enchantment, desire and riches. Where magic pours down every street, hanging in the air like dust.

Many wish their lives could

be filled with such wonder, but not Nahri. She knows the trades she uses to get by are just tricks and sleights of hand: there’s nothing magical about them. She only wishes to one day leave Cairo, but as the saying goes…

Be careful what you wish for.

City of Brass is a first installment in the Daevabad series. I’m great fan of books with djinns and I’ve been wanting to read this book since I’ve first heard about it.  This book was really a delight to read. It was quite different than the other djinn books I’ve read so far, but it doesn’t mean that it was a total perfection. For a debut, I think it was a pretty good start and hope the next one is even better.
Among the bustling markets of Cairo, twenty year old Nahri makes a living by swindling the rich by using her tricks. Magic doesn’t exist in their city and it is illegal to  practice any kind of magic. Nahri possesses a unique ability to heal but she never believed in old tales of Djinns and spirits. They’re only myths to them. When Nahri raises one of the creatures from the myths, her whole world turns upside. She’s forced to travel to a magical world where all myths and legends really exists.
Nahri was a strong and stubborn heroine but some of her actions seemed really annoying and childish sometimes. Although I enjoyed her character, she’s not my ideal protagonist. I hope she changes my opinion in the next book. Dara might seem rude and jerk sometimes but he’s the only character that caught my interest. He’s a very intriguing and fierce character, and I didn’t cared much about the other guy. Prince Ali is another main character in this series but unfortunately he didn’t sparked my interest. His character seemed a little dull to me. His older brother seemed more interesting though. There is some romance in this book. Although I enjoyed it, I wish there was more interactions between the couple because It developed a bit faster than I had expected. Currently, I’m rooting for these two but after the events at the end, I’m not sure that my ship will sail. Honestly, I don’t mind a triangle in a book, but in this one I wish there wasn’t any.
The plot was entertaining but the middle part seemed dragged to me. Nevertheless, the story held my interest till the end. Some of the twists were predictable but some really surprised me especially the last one which left me shocked and heart broken. The epilogue gave me a bit relief and hope. The book was written in Nahri and Ali’s POV. I wish there was also Dara’s perspective in this book. The author’s writing was captivating throughout. The world building, the culture, and the magic was amazing. I really loved the fascinating city of Daevabad where magic and Djinns are norm. There are two types of Djinns, the purebloods who’re called Daevas, and the halfbreeds(offsprings of human and Djinn) called shafits. The magic was unique but don’t expect any djinn lamps in this book. I seriously can’t wait to explore more of this world and magic.
Overall, I really liked this book! Despite few issues, I enjoyed the whole journey. It’s a fun ride filled with magic, adventure, djinns, and a dash of romance. The book finally concluded with a minor cliffhanger but still I’m very much excited for the next book.
Recommend it?

I highly recommend this book if you’re into fantasy reads and djinns.

So, What do you think of this book? Have you read it yet? Do you Plan to read it?

31 thoughts on “The City Of Brass (The Daevabad Trilogy #1) by S.A. Chakraborty [Review]”