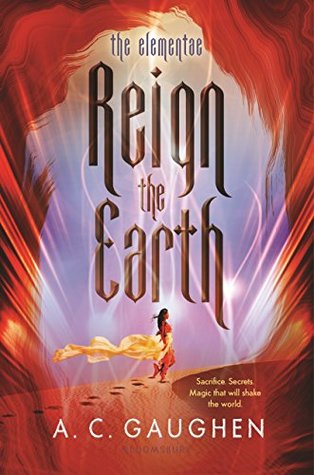 RELEASE DATE: January 30th, 2018
AUTHOR: A.C. Gaughen
GENRE: Young-Adult, Fantasy, Magic.
PUBLISHER: Bloomsbury Children’s Books
SUMMARY:
Shalia is a proud daughter of the desert, but after years of devastating war with the adjoining kingdom, her people are desperate for an end to the violence that has claimed so many of their loved ones. Willing to trade her freedom to ensure the safety of her family, Shalia becomes Queen of the Bone Lands, a country where magic is outlawed and the Elementae–those that can control earth, air, fire and water–are traitors, subject to torture . . . or worse.

Before she is even crowned, Shalia discovers that she can bend the earth to her will. Trapped between her husband’s irrational hatred of the Elementae and a dangerous rebellion led by her own brother, Shalia must harness her power and make an impossible choice: save her family, save the Elementae, or save herself.

“My honor has nothing to do with what man is married to me, or touching me, or loves me. I will not be broken or diminished or belittled by the choices of men around me.”

Reign The Earth is either going to be hit or miss for some people because of the heavy dark themes portrayed in it. This book deals with some heavy topics like physical and emotional abuse, torture, violence, death, and marital rape(not explicit). If you can’t handle those things then better skip this book.  Anyway, coming to the review part, I really liked this book. It’s not something that will blow your mind away but I really loved the storyline and how it was slowly executed without boring the reader. The characters were well built and well developed. The world building, the diversity, and the magical system was amazing. This was my second book by A.C. Gaughen. My first one was Scarlet but I enjoyed this book more than that one.

The story begins with Seventeen Year old Shalia who’s looking forward to her arranged marriage with the rival kingdom’s king Calix in order to establish peace between their kingdoms. She’s a daughter of the desert, but she sacrifices her freedom to save her people from the kingdom of bone lands, where magic is forbidden and people with elemental powers are captured and tortured to death.  King Calix believes he’s a god incarnate and everyone must obey him. He has a deep hatred for elementals, when Shalia learns that she has the power to bend earth, she hides her power from him fearing that he’ll see it as a betrayal and kill everyone she loves. The relationship between them was rough and her brother Rian is the member of the rebellion which always makes him wary of trusting her. On the other hand, she starts to care for Calix younger brother Galen who’s not cruel and ruthless like his brother. Shalia gets torn between her husband’s hatred for Elementae,  her forbidden feelings for his brother, her loyalty to her people, and a dangerous rebellion led by her brother. But in the end she must harness her power in order to save everyone from her husband’s deadly wrath.

Shalia is a strong and independent character. She’s very compassionate, smart, and determined. I really liked her inner strength and how she endured everything. I quite enjoyed her character growth. She always stood strong even after going through emotional and physical abuse.  Calix is a pretty complex character. This guy has some major trust issues and he’s very cruel and ruthless towards his enemies and traitors. Sometimes he acts like there’s still some good inside him but sometimes he acts like total wacko that wants to destroy everything. He is a terrifying villain but his backstory was totally cliched, I expected something different. I loved Galen, Calix’s younger brother. He’s the commander of the army who obeys his brother’s orders. Even though he acts broody, he’s a good hearted guy. I liked the slow forbidden romance between Shalia and Galen. It’s not the central focus of the story but I enjoyed their every interaction. The secondary characters were very interesting especially Shalia’s brothers Kairos and Rian, Calix’s sister Danae, Zeph and Theron. I absolutely loved Kairos and his pet hawk Osmost. He’s a pretty fun character and I would love to have a brother like him. Rian is very protective and a loving brother who cares for Shalia. Danae was totally kickass and I can’t wait to know more about her. Zeph and Theron are Shalia’s guards who were totally fun. I quite enjoyed the banters between them.

The plot was well written and well executed. Even though some parts felt a bit too slow, I was still hooked to the plot till the end. If you’re expecting an action packed magical adventure then this book is not for you. The story was a bit more darker than I had expected, It totally felt like a Mature YA or NA fantasy.  The pacing was good it was neither slow nor fast. The huge plot twist at the end isn’t very easy to predict but I already guessed it. The writing was pretty good. The story was told in Shalia’s first person POV but I really wish it was written in multiple POV’s because it has incredible side characters and I would love to know more about them. The world building and the family dynamics was pretty strong in this book. I liked the diversity aspect and also how the author build the religion and the desert people culture. The elemental  magic was very creative. It’s refreshing to have a earth bender as the main character because it was always either fire, water or air.

Overall, It was a good read! Some might find this book a bit slow, dark, and depressing but I’m glad that it worked out for me cause I really enjoyed it. A lot of things happened at the end of the book and I can’t wait to see what the author has in store for us next.


I highly recommend this book to everyone who loves YA fantasy with mature themes.