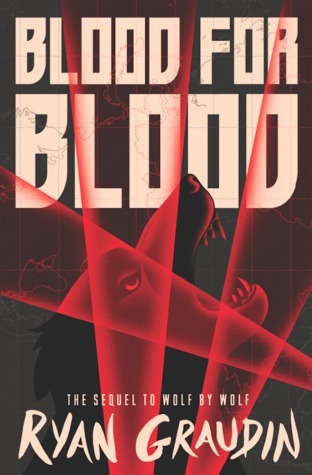 An entire world of it.
For the resistance in 1950s Germany, the war may be over, but the fight has just begun.
Death camp survivor Yael, who has the power to skinshift, is on the run: the world has just seen her shoot and kill Hitler. But the truth of what happened is far more complicated, and its consequences are deadly. Yael and her unlikely comrades dive into enemy territory to try to turn the tide against the New Order, and there is no alternative but to see their mission through to the end, whatever the cost.But dark secrets reveal dark truths, and one question hangs over them all: how far can you go for the ones you love?

I was quite excited before get into this because the first book Wolf by Wolf really blew my mind away with its epic cliffhanger. Blood for Blood was little bit more emotional than the first one. The ending was heartbreaking and bittersweet but it was also satisfying. For me, this was really a great read but to be honest, it wasn’t as amazing as the first book. I loved the plot but the pacing could’ve been a bit fast and I felt some scenes could’ve been better executed. Nevertheless, I still loved it. The characters are pretty good and I’m glad that we finally get to know more about Luka and Felix. If you haven’t read Wolf By Wolf yet then I strongly advice you to skip the summary part which contains spoilers for the first one. If you want you can also check out my thoughts on the first book at here.

After lots of Struggle, Yael has finally arrived at victor’s ball and killed Adolf Hitler in Public on Live Telivision but unfortunately, she soon realizes that he was just another skin shifter like Yael and her real target might be somewhere safe hiding. Now Yael is on the run after her assassination attempt on Fuhrer which she failed and now she needs to get back to her resistance in Germany without getting herself caught which is quite easy for her because of her shifting ability. In the middle of her shifting, Luka who was following her from the ball gets pretty much shocked with her sudden transformation and confronts her. He wants to come along with her and Yael reluctantly agrees because she knew leaving him will be a death sentence for him. On the other hand, Felix finally learns the truth about Yael who was wearing the face of her sister and he feels betrayed that she pretty much ruined his family. Because of Yael’s action in the Victor’s Ball, Mission Valkyrie has began too soon and she needs to right the wrong by killing the real Hitler. With the help of unlikely comrades, she sets on a new journey to enter into the enemy territory.  During their journey, dark secrets are unveiled, loyalties are tested, but in the end blood will be spilled.

Yael is an incredible character and I loved her character growth in this book. In Wolf by Wolf, we saw her cold and fearless side, but in this we’re introduced to her emotional and vulnerable side. She’s forced to face her dark past which she can never forget. In her path to vengeance, she faces loss, love, betrayal and sadness but she never faltered and always stood strong. Luka is a great character. I really loved his wit and humor but sometimes his sense of humor really annoyed me. He had gone through a hard life and it really made me sad with how harshly he was treated by his own father. That scene at the end really killed me. I liked the light romance between Yael and Luka but I wish the author put a bit more focus on their relationship.  I was very much disappointed with Felix in this book. I pretty much loved his character in Wolf By Wolf and I didn’t expect to hate him this much. He faces lots of turmoil and confusion which slowly makes him a bit insane and some of his actions really made me want to strangle him.

The plot was interesting, emotional, and suspenseful but I found the pacing of this a bit slower than the previous installment. The first half of the book was mostly focused on the characters and their development. The second half is pretty much action packed filled with some unexpected twists that really surprised me. There is one heart breaking scene at the end which I already predicted from the start but It still made me quiet sad. I loved the captivating writing style and I’m so happy this one was written in multiple POV’s. I absolutely enjoyed reading the story from Yael, Luka and Felix perspective. The world building is amazing! Graudin is truly a talented author. She created an alternative historical world based on the actual events which really seemed authentic.

Overall, it was a great read! The ending has left me  heart broken but I still think it was an incredible story. I really had an amazing reading experience with this duology and now I can’t wait to read Graudin’s upcoming book Invictus which sounds pretty awesome.

I highly recommend this duology to everyone who loves action packed YA books set in a alternate history.

So, What do you think of this series? Have you read this yet? Do you want to read it?
Please Feel Free To Comment Below. ❤
See You In The Next Post and Have a Great Day! 🙂