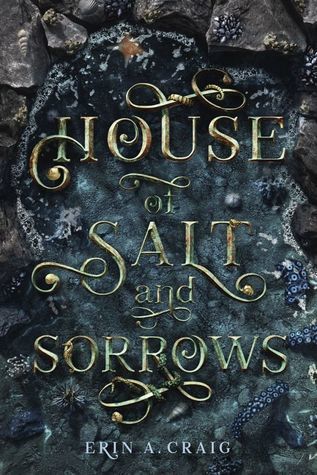 Four of Annaleigh Thaumas’s eleven sisters have returned to the Salt, the brackish water that surrounds their lonely island home, their lives cut short, each more tragically than the last. Whispers throughout the Highmoor estate say the girls have been cursed by the gods.

When Annaleigh finds out that her sisters have been sneaking out to attend glittering midnight balls and dance until dawn, she’s not sure whether to stop them–or join them.

And when she begins to see a series of horrific, ghostly visions and more sisters die, she realizes she must solve the mystery–with the help of Cassius, a sea captain who knows much more about her than he should–and unravel the Thaumas curse before she descends into madness or . . . it claims her next.

House Of Salt and Sorrows is Erin A. Craig’s stand-alone debut YA fantasy novel. It’s a dark retelling of twelve dancing princess with a gothic touch. Well, this book was overall an interesting read but it wasn’t as amazing as I thought it would be. I was pretty much torn between giving it a three and four star rating because I usually rate differently when it comes to debut novels. So, I finally decided to give it a three point five rounded upto four. I think my major issue with this book was the slow pace which failed to build enough suspense in the story. However, I really liked the world building. I honestly didn’t expect it to be so dark. I think It would make a perfect Halloween read.

The story follows Annaleigh Thaumas who’s one of the twelve daughters of the duke of the Salaan Islands. Three of her elder sisters had passed away by tragic accidents and deaths. With the recent unexpected death of the fourth eldest daughter Eulalie, the Thaumas family is in mourning.When news of the death travels across the  island, people believes that the whole family is cursed and they try to avoid the girls like plague. Annaleigh don’t believe that her sisters death was due to a curse and she tries to find the answers, but when tragedy strikes the Thaumas family once again, they start to fear who might be the next. The girls get tired of the mourning and to escape from the grief, they all attend the magical ball where they can dance forever without any worries. Soon it becomes an addiction, Annaleigh couldn’t stop the girls going to the midnight ball every night. When Annaleigh starts to see the ghostly visions of her dead sisters, she fears that she might become mad and end up dead like her sisters.

The main character Annaleigh was pretty likeable. She was sweet, caring and very much loyal to her family. One of her little sisters Verity was both cute and weird, her drawings will creep you out. The other sisters were okay-ish, but I didn’t like Camille she was quite bratty and annoying, I didn’t care about her. I also didn’t care about Annaleigh’s childhood friend Fisher, he was barely there in the plot. Cassius was a nice addition to the plot, but I wish his character was more fleshed out. I wanted to know more of his backstory. The whole drama with Annaleigh’s stepmother Morella was cliched. I honestly felt bad for her. The romance in this book was very light which slightly disappointed me. I wanted more interactions between Cassius and Anna. I wish the author focused a bit more on their relationship instead of building a typical triangle.

The plot seemed too slow for a murder mystery novel. Things get intense only at the end. People who don’t mind slow paced reads will surely enjoy this more than I did. If you’re someone who detest slow reads, then this might disappoint you. This book has some surprising twists and turns. It’s hard to guess who’s the main villain is which I think is a good thing. The whole book was written in Anna’s first person POV. For a debut, I thought the writing was great. The whole setting was amazing. The story was placed on a fictional world called Salaan Islands. It was similar to the historical gothic setting. I liked the whole creepy and dark atmosphere, the unique magic, and the different religion.

Although this wasn’t my favorite, I think overall it was a good debut! The story was very much unique with an interesting concept, and I absolutely loved the setting. I’ll definitely look forward to the author’s next work.

If you don’t mind slow books and love dark grimm fairytale retellings with lots of spooky vibes, then definitely give it a shot.

21 thoughts on “House of Salt and Sorrows By Erin A. Craig [Review]”