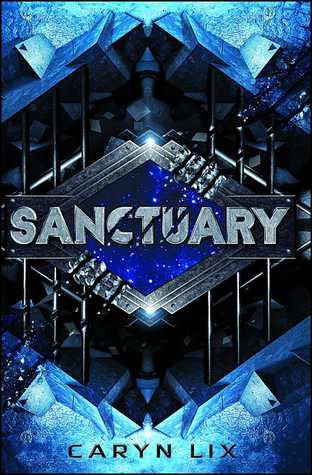 Kenzie holds one truth above all: the company is everything.

As a citizen of Omnistellar Concepts, the most powerful corporation in the solar system, Kenzie has trained her entire life for one goal: to become an elite guard on Sanctuary, Omnistellar’s space prison for superpowered teens too dangerous for Earth. As a junior guard, she’s excited to prove herself to her company—and that means sacrificing anything that won’t propel her forward.

But then a routine drill goes sideways and Kenzie is taken hostage by rioting prisoners.

At first, she’s confident her commanding officer—who also happens to be her mother—will stop at nothing to secure her freedom. Yet it soon becomes clear that her mother is more concerned with sticking to Omnistellar protocol than she is with getting Kenzie out safely.

As Kenzie forms her own plan to escape, she doesn’t realize there’s a more sinister threat looming, something ancient and evil that has clawed its way into Sanctuary from the vacuum of space. And Kenzie might have to team up with her captors to survive—all while beginning to suspect there’s a darker side to the Omnistellar she knows.

This book’s been on TBR list for a while but I finally decided to give it a shot because I was in the mood for a good sci-fi read after reading a lot of fantasy books and this book didn’t disappoint me. It’s not something that’ll blow your mind away but it was really an enjoyable read filled with action, suspense, and thrill. If you’re looking for an entertaining sci-fi read with interesting characters then pick this up.

The story is set in somewhere in a future where superpowered people are treated like dangerous anomalies.  The people who’re too dangerous are contained in a special prison called Sanctuary, an Omnistellar concepts space prison. It’s a containment for superpowered teens and dangerous criminals. Seventeen Year old Kenzie always wanted to become an elite guard of Sanctuary and make proud of her mother who’s the commander of the space station. She wanted to prove herself to the Ominstellar Concepts but when a routine drill goes sideways, she’s taken as an hostage by the criminals. Now Kenzie needs to escape from her captors but when a unknown anomaly infiltrates into their sanctuary killing everyone, she might have to team up with her captors to fight against it.

I honestly didn’t like Kenzie at the beginning because she seemed a bit naive and judgmental. She was raised up believing that all the supernaturals are dangerous criminals. I liked her character development though. The secondary characters were pretty interesting and very much diverse. I don’t want to give away anything but I really liked Cage, Alexei, Rune and Mia. Both Cage and Rune are Taiwanese, Alexie is Russian, and Mia is Irish. They’re all like family and I quite enjoyed the banters between them. There is a light romance in this book, but it’s an insta-love which I’m not much fan of. Thankfully, it didn’t hinder my overall enjoyment.

The plot was engaging throughout. From the first page, I was hooked to the plot. The pace was good. Even though some of the twists in the book were cliched, it didn’t lessen my interest. I honestly wanted to know who’s going to survive in the end and what’s the mystery behind the terrifying aliens. The writing was pretty good for a debut novel. The whole book was written in Kenzie’s first person POV. The setting was nice and I loved the survival elements and action. It was a little disappointing that the powers of the teens were pretty much useless before the aliens but they did help them in other ways.

Overall, I had a good time reading this book! There’s no cliffhanger at the end but the fight hasn’t ended yet and I can’t wait to know what the author has in store for us next.

If you’re looking for a YA SCI-FI read filled with survival action and adventure then definitely give it a shot.