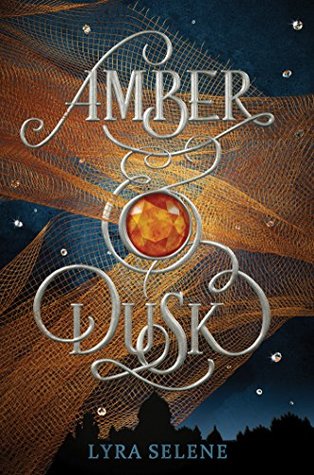 Sylvie has always known she deserves more. Out in the permanent twilight of the Dusklands, her guardians called her power to create illusions a curse. But Sylvie knows it gives her a place in Coeur d’Or, the palais of the Amber Empress and her highborn legacies.

So Sylvie sets off toward the Amber City, a glittering jewel under a sun that never sets, to take what is hers.

But her hope for a better life is quickly dimmed. The empress invites her in only as part of a wicked wager among her powerful courtiers. Sylvie must assume a new name, Mirage, and begin to navigate secretive social circles and deadly games of intrigue in order to claim her spot. Soon it becomes apparent that nothing is as it appears and no one, including her cruel yet captivating sponsor, Sunder, will answer her questions. As Mirage strives to seize what should be her rightful place, she’ll have to consider whether it is worth the price she must pay.

Amber and Dusk is the first installment in a new YA fantasy series from a debut author Lyra Selene. I’m honestly not fan of this cover but I really loved the synopsis so I decided to give it a shot.  Well, this book was pretty entertaining but I found the plot quite predictable. The plot is a mix of some typical YA tropes. However, it has some interesting aspects that kept my interest especially Sunder. For me, his character is this book’s saving grace. If it wasn’t for him, this wouldn’t have been a four star read for me. The heroine Sylvie wasn’t really my ideal  protagonist. I’ve mixed feelings about her character. The world building and the writing was decent enough. For a debut, I think it was a good start and hope the next book is even better.

The story follows seventeen year old Sylvie who travels from duskland to Amber City to become one of the courtiers of the Amber Empress. She has a unique power to create Illusions which is considered as a Curse in the duskland. She grew up in duskland but she never felt like she belonged there. Because of her ability, she was always treated like a monster. So Sylvie sets on a journey to Amber City, a place where people with powers like her are called Legacies. When she finally arrives to the palais of the Amber Empress, her hope for better life is quickly dimmed. She becomes a part of a wicked wager among the Queen’s powerful courtiers. She must assume a new name Mirage and become accustomed with the other rich courtiers and play their deadly games in order to get her spot. Her sponsor is captivating yet cruel who’s reluctant to answer all her questions.  While surviving the court, Sylvie trains her illusion power so that she could impress the empress. When Sylvie begins to unravel the dark secrets of the Coeur d’Or, she starts to reconsider about seizing her rightful place and whether it is worth the price she must pay.

The main heroine Sylvie is not my ideal protagonist. You’re either going to hate her or like her character. She’s stubborn, self entitled, and very much determined. I don’t hate her completely but I was really annoyed with some of her actions in this book. She’s one of those flawed characters who wouldn’t give up easily and fights for what they want(which is her only redeeming quality). She’s honestly not my favorite character in this book. I absolutely loved Sunder! He’s mysterious, dark, cruel, cocky, and oh so alluring. He’s definitely my favorite character in this book. If you like cold, brooding love interest then you’ll like Sunder. In the beginning, he acts like a jerk to Sylvie but he’s got some hidden motives. The romance between Sunder and Sylvie was a total slow burn and I very much enjoyed their every interaction. As for the secondary characters, they’re not memorable enough for me except for one character named Thibo. He was total fun! I wish the author gave more focus on the secondary characters. I really wanted to know more about Dowser, Lullaby, and Luca.

The plot was interesting but sadly it didn’t bring anything new to the table. I easily predicted the plot but it doesn’t mean that I didn’t liked it. For the most part, I really enjoyed the book and that’s why I gave it a four star rating instead of three stars. The pacing was okay. It was neither fast nor too slow. The writing was good. The story was told in Sylvie’s first person POV. I wish this one had dual or multiple POV’s. The world building was good but It would’ve been great if the author provided more info about this world and how it was formed because for the most part, the plot was set in palais of the Amber Empress. I loved the magical aspect, It’s one of the things I enjoyed in this book.

Overall, it was a good read! Despite the flaws, I really liked it. It’s an enjoyable read filled with court politics, magic, mystery, intrigue, and romance. I’ll definitely check out the next book when it comes out.

If you’re planning to read this book then I highly recommend you to go in with low expectations.