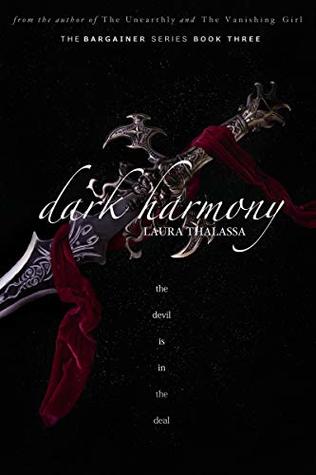 There are worse things than death. Things that lurk in the shadows and slip into your dreams. Things that have no business existing. Things that once slept … but have now awoken.

For Callypso Lillis, the fae magic that now runs through her veins is equal parts curse and good fortune. For the very thing that bonds her to Desmond Flynn, the King of the Night, also makes her vulnerable to the Thief of Souls, a man who wants to break the world … and Callie along with it.
But it’s not just the Thief whose shadow looms over the Otherworld. Des’s father is back from the dead, and he wants revenge on the son who sent him to the grave in the first place.

Des and Callie must figure out how to stop both men, and time is running out. Because there are forces at play working to tear the lovers apart once and for all … and unfortunately for them, death is no longer the worst thing to fear.

“He’s the dark side of the moon. He’s my beautiful, terrible mystery. My friend. My soulmate.”
― Laura Thalassa

Dark Harmony was a pretty good conclusion to the series. The second installment was a little bit disappointing but I really loved this book. As this was a finale to the series, I was hoping for an epic battle but sadly it doesn’t have that. However, it does have a satisfying conclusion. I enjoyed the whole journey. The only issue I had with this book was there were more sex scenes than usual. It might not be an issue for some readers but I would’ve loved it more if the plot focused a bit more on the story because it was f**king finale and I wanted more action. I love Callie and Des. They’re an ultimate power couple and they definitely deserve an happily ever after.

The book starts off from where it was left off in a Strange Hymn. Des saves Callie by giving her Lilac Wine which makes her immortal. Though it makes her bond with Des strong, it also makes her vulnerable to Thief of Souls who has some kind of crazy obsession with her. Des’s father Gallagher is back from the dead and he wants revenge by killing his son and getting back his throne. The Thief of Souls army has finally awakened from their slumber and they’re creating chaos in all the fae courts. Des and Callie needs to find a way to stop him before it’s too late.

Callie has become more strong and powerful after turning into an immortal fae. In her dreams, she always gets taunted by thief of Souls who likes to play cat and mouse game with her. Even though she was vulnerable to him, she was never afraid and always stood strong before him. On the other hand, Des becomes quite protective of Callie after nearly losing her. He was happy that their bond was finally complete. I really liked the strong relationship between Callie and Des. The romance between them was pretty hot, sensual and steamy. They’re so into each other. They couldn’t keep their hands off each other like horny teenagers. As for the other characters, I loved Malaki and Temper. I’m a little disappointed that we didn’t get more of them in this book. I wish the author gave a bit more focus on this couple too. The villain of this series was mysterious and very much intriguing from the start. I was excited to finally meet this guy and damn, he was just as I had expected him to be powerful, dark, evil, and cunning.

The plot was engaging but some parts seemed pretty slow especially in the first half. I like some hot romance in a book, but too many sexy scenes will always slow down a plot. While war is breaking out in their world, Callie and Des were enjoying their mating bond by making out with each other, but I really wanted to know “what’s happening in the background?” It would’ve been great if we also got Malaki and Temper’s POV. There are so many twists and turns in this book. Some of them were predictable but some really surprised me. The writing was captivating and dramatic, as expected. It’s one of the best things I love about Laura’s books. The book was written in Callie’s POV. I really think this would’ve been even more enjoyable if it was written in third person POV. The world building was great. Laura has built a fascinating world and I really want to explore more of it.

Overall, I loved this book! Despite few issues, I really enjoyed it! It was a nice conclusion to the series and I really loved the ending. I’m sad to say goodbye to Callie and Des but I’m glad there’s going to be another story set in the same world. I’ll definitely look forward to it. I really hope it’s the Day King’s Story!

I highly recommend this series if you’re into dark Fae romance series.