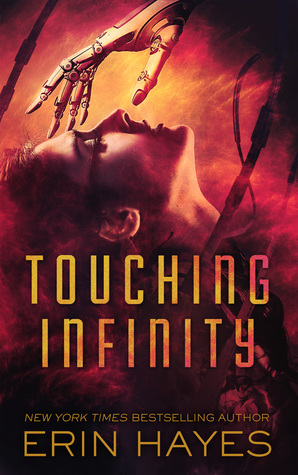 In the future, corporations rule the galaxy. And they’re willing to pay a hefty price to get ahead of the competition.

Enter the downlooters—space pirates who have no affiliation with any corporation. They’ll steal any information for the highest buyer. It’s dangerous work, but for some, it’s the only way to make a living.

It’s how Clementine Jones has spent most of her life. As first mate of the Pícara, she’s more robot than human and the one who downloads classified information to her storage banks.

After years of making successful downlooting runs, she thought she was prepared for everything. She was wrong.

During a particularly easy run, she accidentally downloots a virus unlike anything the galaxy has ever seen. It’s already killed hundreds of thousands at a space port, and it wants to spread even further.

Worst of all, it wants to do it through Clementine.

Touching Infinity is the first book in a new sci-fi series A Rogue’s Galaxy written by Erin Hayes. It’s a series set in a futuristic sci-fi world where robots and human cyborgs exists. The story follows Clementine Jones, a space pirate who downloads illegal information along with her fellow crew mates of Picara. Well, this book was very interesting to read. I liked the unique concept and the sci-fi elements but it needs a bit more improvement in world building and plot building. From the very first page, we are literally thrown into this world that we know nothing about. So it really took me some time to get into this world. The characters were interesting especially Clementine Jones and Orion. It’s been a long time since I’ve read a book with a half human half cyborg protagonist and I had fun reading this book. Despite flaws, it was very entertaining.

The story follows Clementine Jones and the Pícara crew. She’s a space pirate and first mate to the captain. She’s a half human and half cyborg. For every mission, she’s the only one who steals the information from the systems. One day,  they were offered a huge deal that they couldn’t resist. Pícara agrees to the deal even though it sounded too good to be true. When clementine downloots the information into her cybernetic hand, she feels something was wrong when her hand started to act weird.  Soon, things take a dangerous turn and they come to learn it’s a deadly virus which already killed hundreds of thousands at a space port and now it wants to further spread by using Clementine as a carrier. Now Clementine’s  survival or maybe the entire galaxy’s depends on eradicating this virus which seems to have its own mind.

Clementine Jones is a interesting character. She’s strong, fierce, and brave. She’s more robot than human and sometimes she has conflicted feelings about herself. She’s pretty likable but sometimes her actions really annoyed me. Another character that piqued my interest was Orion. He looks like a handsome human on the outside but inside he’s actually an android and he works as a navigator in Pícara. He’s a mysterious character and I really want to know his backstory. There is a small hint of romance between Clementine and Orion, but after certain events I’m not sure how it’ll go further in the next book. As for the crew members we have boatswain named PC, mechanic Daisy, engineer Taka, and a little cabin boy named Oliver Twist. There’s also a cook named Venice Moon and I didn’t like him at all. I’m glad he didn’t get much part in this book.

The plot was fast paced, dark, and interesting throughout. I really liked the VIRUS aspect in the book. It was creepy yet oddly fascinating. Some scenes were pretty gruesome to imagine. The story kept my interest throughout. It was an entertaining read filled with adventure, action, and few surprising twists. The pacing was fast and because of that some parts felt rushed at the end. It was a short read so I easily finished it in two sittings. The writing was good. The book was written in Clementine’s first person POV. The world building was okay but I’m not impressed yet. I hope we get more details about the corporations that runs this world and also some backstory in the next book.

Overall, I liked this book! It wasn’t something mind-blowing but I enjoyed it. I’ll definitely check out the next book when it comes out because I need more Orion.

If you’re looking for a unique sci-fi adventurous read with space pirates then definitely give it a shot.