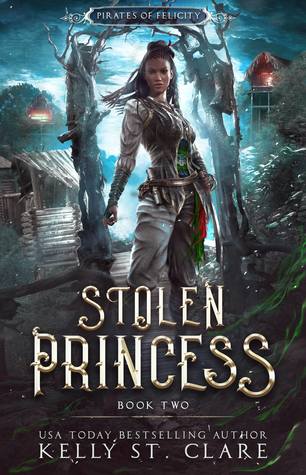 Certainty is slipping through my fingers like pirates’ gold.

After escaping to our secret sanctuary, I’m haunted by the guilt of my decision. And the close call with Malice left me with more than doubt—I’m now harboring a magical fugitive.

When Cosmo reveals a darkness is spreading from his wound, our crew must brave capture by our enemies to cure him. But will saving his life leave me in fragments?

Answers to questions I’d rather ignore are forced savagely into the light.

An ancient, tribal magic squeezes from all sides, leaving one treacherous path that I must walk beside my crew. Except, for the first time in my life, I’d rather walk alone.

Secrecy is becoming too much like normalcy.
Normalcy has become too much to bear.

What will be left when all is undone and I’m left in tatters?

Stolen Princess is the second installment in the Pirates of The Felicity series. Last month, I’ve read the first book in this series and I really loved it. Since then, I’ve been very much looking forward to read the sequel, so, I jumped into it as soon as it landed on my hands. Well, this was as entertaining as the first book. I’m glad that we got more Jagger and Cosmo in this book. Once again, I enjoyed Ebba and her adventures with her six fathers. It’s one of the best things I love about this series. The below summary contains spoilers for the first book, skip it if you haven’t read the first book.

The story continues from where it was left off in Immortal Plunder. Ebba and her fathers nearly escaped from death and also the malice. After their meet with the Selkies, they’ve become the guardian of the magical Plunder that contains strong power. Malice Captain is after the Plunder and he will never stop hunting them until he gets what he wants. So the felicity crew returns to their safe sanctuary, but things take a worst turn when Cosmo reveals a darkness that is spreading from his wound. They need to find the cure before it’s too late which means they have to leave their safe haven and search for the answers with Malice hunting on their trail. Their search leads them to their past and Ebba finally uncovers the secrets that her father has been hiding from her and the truth devastates her.

Ebba Viva was still a naive young pirate but she’s a brave girl with strong heart and I can’t help but like her. Her character was pretty fun and I liked her even more in this book. She finally started to grow into a mature young women and I can’t wait to see her in action in the next book. Her six overprotective fathers Barrel, Peg-leg, Plank, Grubby, Stubby, and Locks were hilarious. Their past finally catches up with them and this time Ebba learns all the secrets that was hidden from her which makes a huge rift in their fathers – daughter relationship. As for the other characters, we have pirate Jagger, and Prince Slave Cosmo. They’re both pretty interesting characters.  Jagger is a bit dark and edgy type of guy. He’s a Malice pirate but he was forced to work with them. This guy seems to have a lot of hidden agendas and I want to know more about his backstory. Cosmo on the other hand is a sweet and caring type of guy who admires Ebba and may have a huge crush on her. He hasn’t revealed his real identity to Ebba fearing that she might hate him. At last, there’s a start of slow burn romance and I’m strongly rooting for Jagger (not because I hate the other guy because he was pretty good too) but after that ending, I don’t mind who she ends up with because they’re both amazing.

The plot was engaging but this time it was mostly focused on family relationships and hidden secrets which made this book a little bit slower than the first one but don’t worry there’s some adventure, magic, action and surprising twists that’ll keep you hooked to the book till the end. The pacing was okay and all the revelations were nice. It looks like the next book going to be even more interesting. The writing was good. I finally got used to the pirate accent and I’m totally loving it.  As usual, the whole book was written in third person pov. The world building was good. There was more magic in this book when compared to the first one and after how things concluded in this one, I think there’s going to be more magic and adventure in the next book.

Overall, I really enjoyed this book! It was a fun read and I really liked all the revelations even though some of them were a bit predictable. I can’t wait to know what the author has in store for us next.

If you like to read YA fantasy filled with adventure, magic, and pirates then definitely give this series a shot. It was very much fun and entertaining!