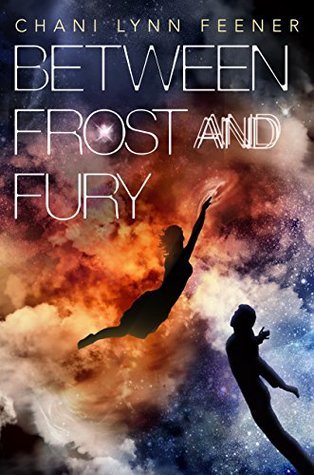 Delaney has been kidnapped by aliens. Again. After only a month back on Earth with her hot new alien boyfriend Ruckus, the deadly and devastatingly handsome prince Trystan has dragged her right back to his planet.

While some girls may dream of winning a prince’s heart, Delaney just wishes this one would leave her alone. Instead, she finds herself at the center of both a tense political battle between two alien kingdoms and Trystan’s romantic attentions, both of which are absolutely ruining the life she’s built on Earth. Not to mention the fact that she’s about to be crowned queen of a planet she’s barely even visited. Just another day in the life of an ordinary human girl.

Between Frost and Fury is a sequel to Amid Stars and Darkness. I liked this sequel, but at the same time I was a bit disappointed with it. The whole book was mostly focused on the romance drama and less on the other aspects of the story. I knew this book was going to be about Trystan so I was very eager to read it but I didn’t expected that  Ruckus is going to be sidelined in it and I’m not happy with that part. Although I enjoyed the relationship between Trystan and Delaney, It was a bummer that there’s not much action. I really expected more from this book besides the love triangle. I don’t hate love triangles if they’re done well and this one was predictable yet interesting. I hope the next book is focused a bit more on the story.

The book starts off from where it was left off in the first book. After only a month back on Earth, Delaney gets abducted by Prince Trystan. She’s once again gets dragged back to Xenith to fulfill the vows she had made with Trystan when she was being impersonated as Princess Lissa. Now she was held against her will by Tristan who wants to attain peace between Vakar and Kint by marrying her. They both want to avoid the bloodshed and war, but Delaney don’t want to become a Queen to an alien Planet that she barely knows and leave her dreams on her home planet. She gets stuck in a political battle between two alien Kingdoms, and had to deal with unwanted romantic attentions from her dark alluring captor who turns out to be much different than she had expected. Delaney needs to make an escape plan before her fate gets sealed forever with Trystan.

I’ve mixed feelings about Trystan. I hate him but at the same time I love him so much. His character was fleshed out well in this book. He was introduced as a dark and brooding prince in the first book, but we finally get to see the real side of him in this sequel. It’s pretty easy to guess that he developed some feelings for Delaney. I was irked by his hot and cold personality towards Delaney. Sometimes he acted like a jerk to her, but he does care for her and tries very hard to win her over. As for Delaney’s alien boyfriend Ruckus, he didn’t have much part in this book which really disappointed me. I’m actually rooting for Ruckus, but after finishing this book I don’t know to whom to root for. Ruckus and Trystan both make strong love interests, but I didn’t liked how they’re so loyal to their kingdoms. Delaney was pretty enjoyable in this book. I’m glad that she wasn’t easily charmed by Trystan’s attentions because she loves Ruckus and I don’t want her to be an unfaithful girlfriend. At the end, her feelings began to waver a little bit and I don’t blame her either, but I hope she makes the right choice in the end.

The plot was engaging filled with royal politics, romance, drama, and adventure. It was a fast paced read. I wish there was a bit more action. This book mostly centered around Delnaey and Trystan, and it would’ve been great if we also got Ruckus side of the story and how he was planning to rescue Delaney. I think Chani deliberately sidelined Ruckus so Trystan can get the major attention and she didn’t failed. Now I’m a bit afraid for my ship because Trystan brings a great challenge to Ruckus and i can’t wait to see who’ll win at the end. I liked the writing. The book was told in Delaney and Trystan’s POV’s. I quite enjoyed reading Trystan’s POV and loved getting to know more about him and his insecurities. The world building was good. In the first book, we’re introduced to Vakar people and their culture, but the second book is all about Kints and their advanced technology.

Overall, I enjoyed this sequel, but it’s not my favorite. The book concluded with a minor cliffhanger and I can’t wait to see what happens next.

I recommend this series if you like YA alien sci-fi romances filled with adventure and action.