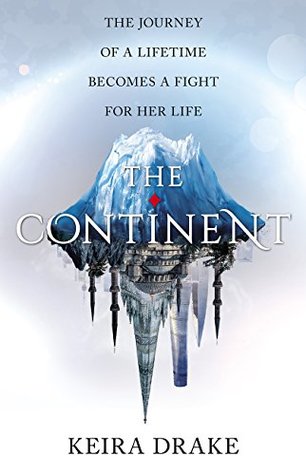 Part allegory, part romance and part against-the-odds survival story, Keira Drake’s sparkling debut novel engages readers with questions of social responsibility, the nature of peace and violence, and the value-and danger-of nationalism. Thought-provoking, fast-paced and surprising, The Continent will haunt readers long after its covers have been closed.

From a land without war to a continent of two warring nations… one girl’s crash landing becomes a fight to survive.

For her sixteenth birthday, Vaela Sun receives the most coveted gift in all the Spire – a trip to the Continent. It seems an unlikely destination for a holiday: a cold, desolate land where two ‘uncivilised’ nations remain perpetually locked in combat. Most citizens lucky enough to tour the Continent do so to observe the spectacle and violence of war, a thing long banished in the Spire. For Vaela – a talented apprentice cartographer – the journey is a dream come true: a once–in–a–lifetime opportunity to improve upon the maps she’s drawn of this vast, frozen land.

But Vaela’s dream all too quickly turns to a nightmare as the journey brings her face–to–face with the brutal reality of a war she’s only read about. Observing from the safety of a heliplane, Vaela is forever changed by the bloody battle waging far beneath her. And when a tragic accident leaves her stranded on the Continent, she finds herself much closer to danger than she’d ever imagined. Starving, alone and lost in the middle of a war zone, Vaela must try to find a way home – but first, she must survive.

I didn’t know reviewing a controversial book is this hard. The reason I picked this up because the concept intrigued me and all the negative reviews has done nothing but pique my interest even more. I didn’t expect to like it, but surprisingly I found myself enjoying it. I’ve read the rectified version but I haven’t read the first version of this book which I heard had a lot of problematic racial issues. After reading this book, I can pretty much understand why some readers are irked about it and I don’t blame them either. This book has great potential and I think it wouldn’t have faced such issues if it was fully fictional not based from other cultures and people from the real world. Adding to that it has a white savior complex which made things even worse. Despite all these issues, I quite enjoyed the story but it doesn’t mean that I love it.

Sixteen Year old Vaela Sun from Spire is a talented  apprentice cartographer who dreams of travelling the world and drawing maps. On her sixteen birthday,  her parents presents her a unique gift, a ticket to the continent. For vaela,  It’s a dream come true but unlike peaceful Spire, the Continent is a constant battleground between two warring nations for years. The continent is off limits to them so they watch everything from the heliplane. Vaela isn’t interested in watching the brutal fights, she’s all about exploring the continent and studying it’s geographical structure. Having been come from a peaceful and luxurious world, Vaela doesn’t have any idea about the brutality of the war and its consequences but it all changes when their heliplane crash lands in the middle of a warzone. Her dream tour turns into a nightmare and survival is the only option left for her. Surrounded by dangers everywhere, Vaela needs to find her way back to the Spire which is pretty much impossible.

I’ve mixed feelings about Vaela! She’s smart, brave, and compassionate character. I didn’t liked her at the beginning when she seemed a bit judgmental towards the people of continent, but as the story progressed I grew to like her and her stubbornness. She never gives up hope, and wouldn’t hesitate to stand up for what she believes is the right thing to do. To avoid spoilers, I’m not going to say anything about the secondary characters but I really liked them especially the love interest who’s totally swoon worthy.  He’s my favorite character in this book and I want more of him. The romance was cute and I quite enjoyed every interaction between them. Although it seemed a bit insta-lovey, I liked it.

The plot was engaging and interesting from the start but it was also predictable. Nonetheless, I was hooked to the story till the end. I would’ve given this a four star if it wasn’t predictable. Coming to the issues part, the two warring nation’s people Xoe and Aven’ei are actually based on Native Americans, and Japanese. They’re depicted as  uncivilized, dark skinned, and savages which made readers flare up with anger and that’s why there was so much hate on this book. To make matters worse, the civilized white people are the saviors. I think you finally got the gist. Honestly, I found this book problematic too, but I enjoyed the story and the characters. The violence in this book is brutal so be warned. The writing was pretty good. The whole story was told from Vaela’s first person POV, but I think this book should’ve been written in dual POV so we could understand both sides of the world. The world building was intriguing. It’s a unique mix of Edwardian times and a futuristic world, the author described everything in detail.

Overall, It was a good read! I enjoyed the concept, the world, and the characters but I  agree with the other readers that the representation was wrong. Do I continue with this series? Yes, I will read the next book when it comes out.

I think it will be a hit or miss for some people, but if you want to read it give it a shot.