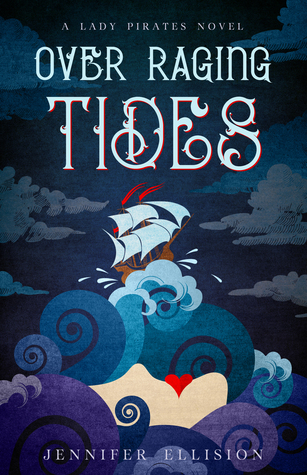 The pirate crew of the Lady Luck lives by many rules, but chief among them is this: they do not allow men on board.

That’s a rule that quartermaster Grace Porter is willing to break when a shipwrecked young nobleman offers her information of an omniscient map, stolen from his warship by an enemy vessel. Until now, the map was only the stuff of legend… but with its help, Grace may finally be able to hunt down the Mordgris, the sea monsters who stole her mother away from her.

Unfortunately, some members of her crew have other plans…

To find the map and face the Mordgris, Grace will have to confront her past, put the Luck between warring nations, and uncover treachery aboard the ship. And ultimately, her revenge and the destruction of the Mordgris will come at a hefty price: the betrayal of her crew.

Grace promised them they wouldn’t regret this.

She just isn’t sure that she won’t.

I’m quite fond of fantasy books involving pirates, monsters, and sea adventures. I Just couldn’t resist them. When the author approached me with a review opportunity, I didn’t hesitate because after reading that synopsis I was totally sold. Over Raging Tides was really a good short read, I had fun reading it but I also had few issues with it. I liked the plot, the concept, and the characters. It gave Daughter Of The Pirate King vibes because it has some similar aspects but plot-wise they’re different. I think it’s a nice start to a new series and I immensely enjoyed it.

Lady Luck is a pirate ship filled with female crew. They have no loyalty to any King or Queen. They all live by many rules and one of their major rule is that no man should aboard the ship.  Grace Porter is the quartermaster and also first mate under Captain Ilene.  When they come across a wrecked ship, they were expecting treasure but instead they find two male survivors. Grace saves them from the dangerous sea creatures Mordgris and gets them on-board the Lady Luck even though it’s against the rules. Captain Ilene is ready to throw them out of their ship as soon as they touch the land but It turns out that both of them belongs to a noble family and the older brother Leo offers them a deal that they couldn’t resist. He claims that he has the information on the magical treasure map that they had been searching for years. The map was a myth, but with this new revelation a new set of hopes arises and they’re ready to go against the rebel warships to get the map from them.  Grace’s mother was kidnapped by the Mordgris when she was a kid and the map is the only thing that can lead her to their den. During the journey, she confronts her past and also the treachery abroad the ship. While everyone is thirsting for treasure, Grace thirsts for revenge against the Mordgris so she decides to take matter on her own hands which leads to great consequences.

I really liked Grace! She’s a bad-ass heroine who’s smart, strong, sassy, stubborn, and fearless. I quite enjoyed her character even though I didn’t agree with some of her actions. She’s a ruthless pirate who wouldn’t hesitate to shed some blood but she isn’t merciless either. The supporting characters were good but it would’ve been great if they’re more fleshed out. I quite  enjoyed the slow budding romance between Leo and Grace but their relationship felt a bit rushed in the second half. I wish there was more interactions between them. They both come from  different worlds and it was fun watching them getting attracted to each other even though they don’t want to.

The plot was interesting and engaging throughout! The story moved in a fast pace and I was hooked to it till the end. The whole book was told in Grace’s first person POV. I loved the action, the adventure and the little romance. I liked the Writing and it was very easy to understand. The plot twists were good but some of them were quite predictable to me. My major issue with this book was “Why the hell it was so short?” I wanted it to be a bit longer. Because of this issue some of the aspects felt under developed and rushed. I would’ve given this a full four stars if it was longer, and more detailed. This one really needs more world building, more detailed backstory, and more depth to characters. The Mordgris are creepy and dangerous sea creatures just like Sirens, and I would love to learn more about them.

Overall, I loved it! The whole book was a fun adventurous ride and that cliffy at the end made things even more interesting. I would definitely check out the next book when it comes out. I really hope it is even more better and longer than this one.

Despite issues, this was worth a read and I would recommend it to everyone who loves YA fantasy books with badass female pirates. If you’re looking for a quick adventurous read then definitely pick this up.