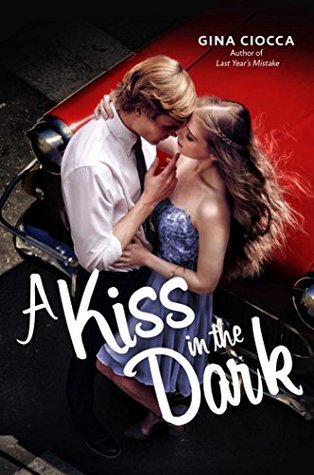 After being kissed by a mystery guy when the lights go out during a football game, Macy is determined to figure out which of three possible boys is the culprit in this funny, poignant, and achingly romantic novel from the author of Last Year’s Mistake.

When the lights go out at a Georgia high school football game, senior Macy Atwood finds herself in the arms of a boy who kisses her senseless—but he’s gone by the time the lights come back on. All she knows is that there was something special—and oddly familiar—about her mystery kisser.

Noah Granger, Ridgedale’s resident bad boy and newest transfer student, has no problem taking credit for the kiss, but Macy can’t shake the feeling that he’s lying. Especially since a photograph of Macy and former star football player Joel Hargrove resurfaced online moments before the blackout, a not-so-random reminder of how hard she fell for Joel last year. And how doing so ultimately sent her lifelong friendships with Meredith Kopala and Ben Collins up in literal smoke.

Soon last year’s wounds begin to reopen as Macy realizes the events that unfolded during junior year are somehow tied to her mystery kisser.

But the closer Macy gets to figuring it all out, the more she starts to worry that the boy who kissed her in the dark and the boy who is stealing her heart might be two very different people.

I have mixed feelings about this book. It was fun to read, but honestly I didn’t enjoy it as much as I hoped. From the blurb and the cover, I expected some swoon worthy romance not some high school drama. The mystery and the twists in the plot were pretty much predictable. The main character was not bad but her ignorance quite frustrated me. I’m not saying it was a terrible read because the plot was entertaining enough to enjoy and some might even love it if you’re into books set in high school. This was actually my first book by Gina Ciocca but definitely not my last.

The book starts with high school senior Macy Atwood attending the football game. Everyone was assembled at the ground, but suddenly when the lights go out, someone kisses her passionately in the dark. Macy gets surprised by the kiss but she couldn’t push him away because he feels like someone familiar that she don’t want to let go. When the lights turns back on, her mystery kisser disappears leaving her perplexed. Macy feels that he is someone she already knows and currently she has two people in her mind. It’s either Noah Granger, the school’s bad boy and transfer student or her ex-boyfriend Joel Hargrove who broke her heart. Noah quickly takes credit for the kiss but she believes that he’s lying. So much has happened on her junior year which ruined her friendship with Meredith Kopala and Ben Collins. Now dealing with the last year’s events, Macy tries to figure out who actually kissed her.

Macy Atwood is an okay-ish character but she’s not my favorite protagonist. I really liked her at the beginning but as the story progressed, she started to annoy me. She seemed too dumb to figure out the answers even when they are right in front of her. I really wanted to strangle her when she can’t see the obvious. Joel is a complex character who’s fighting his own issues. He was always treated like an outsider in his school because he once belonged to their rival school. Noah is the school’s bad boy and and a new transfer student. Okay, there’s nothing special about this guy except for the secret he’s hiding. I really liked Ben Collins. He’s super sweet, caring, talented, and good hearted. I also liked Macy’s best friend Meredith. I felt sorry for Meredith but I really enjoyed the friendship between her and Macy.

The plot was fun but I hate that it was mostly centered around high school homecoming drama. Apart from the mystery kisser aspect, it was nothing original. The mystery and the twists were pretty easy to figure out. I was somewhat disappointed with the romance part. The cover is a bit deceiving because romance is definitely not the major focus in this book. The only redeeming factors of this book are the friendship, the family dynamics, and the diverse aspects. The writing was pretty good and easy to follow. The whole story was told in Macy’s first person POV. I liked the format of this book. The story alternates between Macy’s senior year and junior year so we could see what really happened in the past.

Overall, I enjoyed the book but I didn’t love it. The drama kept me interested but I wish there was more romance, and the secondary characters were a bit more fleshed out. Anyway, the story finally wraps up pretty nicely with a satisfying cute ending.

I highly recommend this book to everyone who loves to read YA contemporary books surrounding high school life.