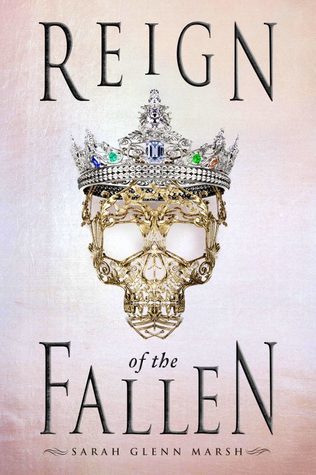 Odessa is one of Karthia’s master necromancers, catering to the kingdom’s ruling Dead. Whenever a noble dies, it’s Odessa’s job to raise them by retrieving their souls from a dreamy and dangerous shadow world called the Deadlands. But there is a cost to being raised–the Dead must remain shrouded, or risk transforming into zombie-like monsters known as Shades. If even a hint of flesh is exposed, the grotesque transformation will begin.

Soon a crushing loss of one of their own reveals a disturbing conspiracy: someone is intentionally creating Shades by tearing shrouds from the Dead–and training them to attack. Odessa is faced with a terrifying question: What if her necromancer’s magic is the weapon that brings Karthia to its knees?

Okay, I thought I was going to love this book but sadly, I didn’t. This book has an intriguing premise and has so many positive reviews which made me put some high expectations on it. Well, I didn’t enjoy the story as much as I hoped and I also had some issues with it. I actually wanted to read this book because of the necromancy aspect which is the first thing that grabbed my interest. The characters seemed okay-ish and the plot felt pretty predictable for me. The necromancer magic was unique but it wasn’t that interesting either. There was not much world building in this book which was another disappointment for me. However, for a debut, I think it’s a good start and I hope the next book is better.

The story follows seventeen year old Master Necromancer Odessa who serves the royal and noble families of Karthia. Whenever a royal member dies, Odessa’s job is to raise them from the dead so they can continue their reign. In the mean time, the souls are wandered in the dangerous shadow world called deadlands. Every Necromancer have to retrieve the soul from the dangerous deadlands and bring it back to their body in order to revive them. One day, while retrieving King Wylding’s soul, Odessa and her partner Evander finds a master necromancer dead in the deadlands and soon they get attacked by a dangerous shade, zombie like monster. The whole incident raises an alarm and fear among the necromancers. When shades starts to attack in the human lands, everyone in karthia begins to panic. The people whose eyes  filled with  respect for the necromancers are now filled with suspicion and disdain. Odessa searches for answers and she finds that someone is creating the shades and controlling them for their evil deeds. Can Odessa save her kingdom in time before it’s too late?

I can’t connect with any of the characters which was one of the major issues I had with this book. Odessa was an okay-ish character and she wasn’t as strong as I expect her to be. When tragedy struck her, she falls into depression and gets addicted to drugs and makes some stupid decisions which quite annoyed me. She’s a bisexual protagonist which is the only thing I liked about her character. The secondary characters seemed interesting but sadly, they aren’t fleshed out well enough. They appeared whenever they’re needed and quickly disappeared. I really wanted to know more about Meredy, Valoria and Kasmira. The romance was a huge disappointment and I didn’t care much about it. There was zero chemistry between the characters and it kinda felt forced to me.

The plot was interesting but it was somewhat predictable for me.  It’s a fast paced plot but the middle part felt slow. The action scenes failed to thrill me because I didn’t feel any tension. After I took a break from the book, I wasn’t eager to get back into the story. I wasn’t emotionally invested. I couldn’t wait for the story to be over which is sooo not a good feeling when reading. The author’s writing was good but I think it needs some more improvement. The whole book was told from Odessa’s POV but I honestly think this one should’ve been written in multiple POV’s. There’s not much world building in this book which was a bit disappointing. We mostly get to explore Karthia and the deadlands. The necromancy magic didn’t seem that much interesting to me. I wish the author explained a bit more about the world and the magic.

Overall, it was an okay-ish read for me! I liked the diverse aspect in this book. The story also focused on grief, depression, addiction, and healing which is rare in YA fantasy books. I’m not sure if I’m going to pick up the next book in this series but we’ll see.

I would recommend this book to all the YA fantasy readers because me not loving this book is very much a case of it’s not you, it’s me. I just didn’t connect.  It might work out for you. So, do give it a shot!