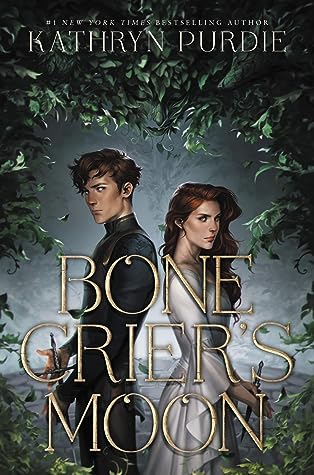 Bone Criers have a sacred duty. They alone can keep the dead from preying on the living. But their power to ferry the spirits of the dead into goddess Elara’s Night Heavens or Tyrus’s Underworld comes from sacrifice. The gods demand a promise of dedication. And that promise comes at the cost of the Bone Criers’ one true love.

Ailesse has been prepared since birth to become the matriarch of the Bone Criers, a mysterious famille of women who use strengths drawn from animal bones to ferry dead souls. But first she must complete her rite of passage and kill the boy she’s also destined to love.

Bastien’s father was slain by a Bone Crier and he’s been seeking revenge ever since. Yet when he finally captures one, his vengeance will have to wait. Ailesse’s ritual has begun and now their fates are entwined—in life and in death.

Sabine has never had the stomach for the Bone Criers’ work. But when her best friend Ailesse is taken captive, Sabine will do whatever it takes to save her, even if it means defying their traditions—and their matriarch—to break the bond between Ailesse and Bastien. Before they all die.

Bone Crier’s Moon is the first installment in Kathryn Purdie’s second YA fantasy series Bone Grace. It’s one of my highly anticipated books of 2020 because I’m a sucker for anything that has enemies to lovers trope. I loved the cover which is of course designed by the talented charlie Bowater. This was a captivating story filled with romance, sisterly love, friendship, magic, and betrayal. The plot was unique but it doesn’t mean that I didn’t have any issues with it. It’s one of those books that you would either hate it or love it.

Bone Crier’s Moon tells the story of Bone criers, women who ferry the spirits of the dead into goddess Elara’s Night Heavens or Tyrus’s Underworld. To dedicate their service to the gods they sacrifice their true love by killing them. All the bone criers gain strength from the animal bones. Ailesse has been prepared since birth to become the matriarch of the Bone Criers, but for the first rite passage she must kill her true love. Her best friend Sabine doesn’t like blood shed and being a bone crier. To help her friend in her rite of passage, they travel to the mortal world to lure her lover and kill him. Bastien’s father was killed by a bone crier when he was young and since then he’s been planning for revenge. After a long wait, the time has come for avenging his father’s death. He sets a trap for a bone crier and finally captures Ailesse but he doesn’t kill her. Meanwhile, Sabine is determined to rescue her friend even if it means going against their matriarch.

The book follows three characters Ailesse, Bastien, and Sabine. Ailesse is a strong and determined character but I wasn’t very much impressed with her. She isn’t a worst character, I just found her okay-ish. Nothing extra-ordinary. Bastien is also the same. He wasn’t intriguing and I found him a bit dull. I wish there’s some backstory about him. I honestly didn’t care much for Ailese and Bastien but I really loved Sabine. She’s complex and very much loyal to her friend. I really enjoyed her character development. If it isn’t for her, I would’ve given this book a three star rating. The supporting characters aren’t memorable enough to describe.

The plot was interesting but it’s definitely not a fast paced read. If you’re hooked to the plot then you wouldn’t mind much about the pace. Even though Ailesse and Bastien aren’t my favorite characters, I did enjoyed the forbidden romance between them. The sisterly bond between Ailesse and Sabine was pretty good too. I enjoyed it a lot more than the romance. The author’s writing was captivating. I didn’t have any issues with it. The book was written in multiple POV’s but I mostly enjoyed Sabine’s POV. The world building was great. I loved the bone crier’s concept which was very unique. I hope there’s more magic in the next installment.

Overall, I enjoyed this book! Despite issues, I can’t stop myself from reading it till the end. The book finally concludes with a cliffhanger and I’m definitely picking up the next book when it comes out.

I would recommend this book if you like enemies to lovers trope. It was either a hit or miss for some people so I suggest you to lower your expectations before jumping into it.