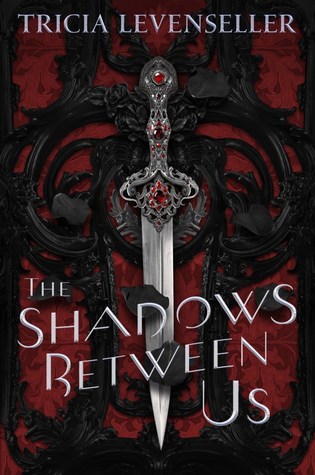 BOOK TITLE: The Shadows Between Us
SERIES: Stand-alone
RELEASE DATE: February 25th 2020
GENRE: Young Adult, Historical Fantasy, Romance.
AUTHOR: TRICIA LEVENSELLER
PUBLISHER: Feiwel & Friends
BUY LINK: AMAZON
BLURB:
Alessandra is tired of being overlooked, but she has a plan to gain power:
1) Woo the Shadow King.
2) Marry him.
3) Kill him and take his kingdom for herself.No one knows the extent of the freshly crowned Shadow King’s power. Some say he can command the shadows that swirl around him to do his bidding. Others say they speak to him, whispering the thoughts of his enemies. Regardless, Alessandra knows what she deserves, and she’s going to do everything within her power to get it.But Alessandra’s not the only one trying to kill the king. As attempts on his life are made, she finds herself trying to keep him alive long enough for him to make her his queen—all while struggling not to lose her heart. After all, who better for a Shadow King than a cunning, villainous queen?

I loved Tricia Levenseller’s previous works Daughter of The Pirate King, and Warrior Wild. I was really excited about her new book because I love morally grey characters and stand-alone reads. I honestly thought that I would love it, but instead I was left with mixed feelings. The book began with a great start but slowly things started to take a downhill for me when the plot became predictable and the male lead started to appear dull. He’s your typical broody love interest with mysterious vibes but honestly I’m not much impressed with him. There’s no backstory about him and his power. He seemed more like a accessory for our mc. I wish the author gave more focus to his character. Alessandra is a morally grey character who’s smart, arrogant, cunning, manipulative, and also a little annoying. She killed her first love just because he rejected her. I enjoyed her character but I don’t love her.

If you’re expecting this to be a magical adventure then it will disappointing you guys. It was a story filled with royal politics, mystery, humor, betrayal, and a dash of romance. Even though it didn’t meet my full expectations, It wasn’t a boring read and I overall enjoyed the story.

RECOMMEND TO: Readers who likes YA fantasy with morally grey characters, and  Court Politics.
MY RATING: 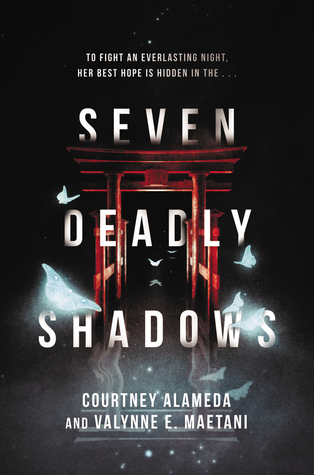 BOOK TITLE: Seven Deadly Shadows
SERIES: Stand-alone
RELEASE DATE:  January 28th 2020
GENRE: Young Adult, Urban- Fantasy, Mythology, Magic.
AUTHOR: Courtney Alameda & Valynne E. Maetani
PUBLISHER: Quill Tree Books
BUY LINK: AMAZON
BLURB:
Kira Fujikawa has always been a girl on the fringe. Bullied by her peers and ignored by her parents, the only place Kira’s ever felt at home is at her grandfather’s Shinto shrine, where she trains to be a priestess.

But Kira’s life is shattered on the night her family’s shrine is attacked by a vicious band of yokai demons. With the help of Shiro—the shrine’s gorgeous half-fox, half-boy kitsune—Kira discovers that her shrine harbors an ancient artifact of great power . . . one the yokai and their demon lord, Shuten-doji, will use to bring down an everlasting darkness upon the world.

Unable to face the Shuten-doji and his minions on her own, Kira enlists the aid of seven ruthless shinigami—or death gods—to help stop the brutal destruction of humankind. But some of the death gods aren’t everything they initially seemed, nor as loyal to Kira’s cause as they first appeared.

With war drawing nearer by the day, Kira realizes that if this unlikely band of heroes is going to survive, they’re going to have to learn to work together, confront their demons, and rise as one to face an army of unimaginable evil.

I never read Courtney Alameda’s books but I really wanted to give this a shot because I’m a sucker for books based on Japanese mythology. So did I love this book? Sadly no, but I did enjoyed reading it. My biggest issue with this book was that it felt more like a second book in a series and I couldn’t connect with any of the characters. It felt like reading a fanfiction novel of various animes. It was easy to guess that this book was influenced by various animes like Inuyasha, XXXholic etc. The main characters Kira and Shiro were okay-ish. Kira is a high school teenager who’s training to be the next priestess of her Grandfather’s shinto shrine. Besides her grandfather, she’s the only one in her family who has the ability to see Yokai. Shiro is a half kitsune and also guardian of the shrine. The romance between Kira and Shiro was sweet, but I honestly didn’t care much about it. The relationship between them was already established and it was a bit disappointing that we didn’t get to see how it all started. Some of the secondary characters weren’t fleshed out well enough. I wanted to know more about Shiro’s brother, and his mother. And also about Kira’s family members and the Shinigami that joined her cause. My favorite character was the demon cat named Nekomata. He’s fierce, deadly and also adorable. The plot was interesting filled with action, adventure, and magic. It was a retelling of Akira Kurosawa’s Seven Samurai and the author gave her own twist to the story. Overall, it was a fun read if you’re looking for an anime in a YA book form. 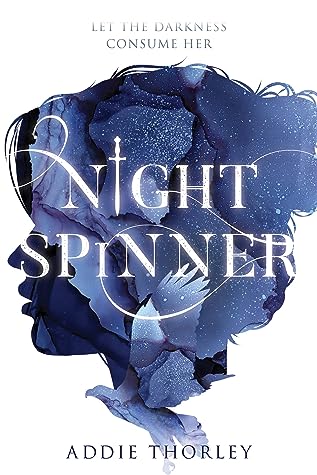 BOOK TITLE: Night Spinner
SERIES: YES
RELEASE DATE: February 11th 2020
GENRE: Young Adult,  Fantasy, Magic.
AUTHOR: Addie Thorley
PUBLISHER: Page Street Kids
BUY LINK: AMAZON
BLURB:
Before the massacre at Nariin, Enebish was one of the greatest warriors in the Sky King’s Imperial Army: a rare and dangerous Night Spinner, blessed with the ability to control the threads of darkness. Now, she is known as Enebish the Destroyer―a monster and murderer, banished to a monastery for losing control of her power and annihilating a merchant caravan.

Guilt stricken and scarred, Enebish tries to be grateful for her sanctuary, until her adoptive sister, Imperial Army commander Ghoa, returns from the war front with a tantalizing offer. If Enebish can capture the notorious criminal, Temujin, whose band of rebels has been seizing army supply wagons, not only will her crimes be pardoned, she will be reinstated as a warrior.

Night Spinner is the first book in Addie Thorley’s new YA fantasy series. When I picked this up, I didn’t know what to expect from this book. I liked the idea of a flawed heroine who’s banished for losing control on her dangerous power. Well guys, this book didn’t work out for me. First of all, this book was freaking slow and nothing major happens until we get to the last part. My second issue was the secondary characters. They were dull and cliched. The romance seemed forced and there’s no chemistry between the characters. The only thing that made me continue till the end was the main character. I enjoyed the complex relationship between her and her sister. It was more interesting than the cliched romance. I predicted the major twist at the end. After reading so many YA fantasies, it was easy to predict some of the aspects. The world building was decent enough, but I wish the author provided more details. The magical aspect was interesting. The writing was pretty good for a debut. Overall, It was an okay-ish read for me. If it wasn’t for that last part, It would’ve been a two star read for me.  I’m not going to continue the series because slow reads aren’t for me. If you are interested in this book, then definitely give it a shot because you might enjoy it more than I did.

RECOMMEND TO: Readers who don’t mind slow YA fantasy.
MY RATING:

So, What do you think of these books? Have you read any of them? Please share your thoughts in the comments below!

4 thoughts on “Mini Reviews: The Shadows Between Us | Seven Deadly Shadows | Night Spinner”