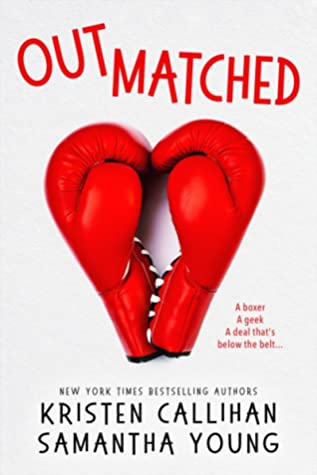 What happens when a boxer finds chemistry with a geek?

Parker Brown can’t believe she needs to hire a fake boyfriend. When she landed her dream job in renewable energy, she thought she’d be entering a world at the forefront of progressive thinking. But the head boss prefers to promote employees who are “settled.” Thankfully, she’s found the perfect candidate, a fellow intellectual looking for some quick cash.

What Parker gets is his protective big brother—Rhys Morgan. The tall, muscled ex-boxer with a foul mouth shows up just as her boss does, and now she’s stuck with the manipulative jerk.

Responsibility weighs heavily on Rhys. Now permanently out of the ring, he’s trying to hold together his late father’s gym and keep his younger brother, Dean, on the straight and narrow. To save Dean from himself, Rhys takes his place, ready to give this society girl a piece of his mind. Instead, he finds an opportunity. Even though they can hardly stand each other, posing as Parker’s boyfriend is a win-win deal. She gets to keep her job, and he’ll charm her star-struck boss into sponsoring his gym.

Problem is, they can barely keep their hands off each other. And what started as an easy deal isn’t so easy anymore. Because what future can a rough ex-boxer, afraid to open his heart, and a polished society geek, who has sworn off real relationships, possibly have?

They say opposites attract. These opposites are about to combust on impact.

I’ve picked this up on a whim when I was looking for a light contemporary romance after reading lots of fantasy. I’m already familiar with few of Samantha and Kristen’s works so I knew this won’t disappoint me. Outmatched is a fun romantic comedy between two people who have opposite personalities. I really liked the characters and the romance was hilarious and sexy. If you like fake relationship trope then you really need to give this a shot.

Parker Brown is a 30 year old independent women who comes from a privileged family. For 13 years she’s been single. To impress her misogynistic boss, she hires a fake boyfriend from an online app. Instead of the hired man, she gets his protective older brother who’s a total jerk to her. Rhys Morgan is a retired boxer who’s managing his late father’s boxing gym. Besides their financial crisis, he also had to look after his younger brother Dean who’s a bit of a trouble maker. So when he learns that his brother got a job pimping himself to a rich chick, he takes matters in his own hands. He’s ready to give this society girl a piece of his mind, but after meeting her he changes his mind when he gets an opportunity to find a sponsor for his gym. Parker’s Boss is pretty much impressed with her new fake boyfriend and now she’s stuck with him.

I really loved Parker Brown! She’s smart, quirky, and super fun. I also liked her family who’re not like your typical judgmental rich families. Rhys was broody, sarcastic, and sexy. He’s a bit of jerk towards Parker because he thinks she’s a rich snob but after learning more about her, he starts to admire her. The romance between Parker and Rhys was super hot. The chemistry between them was sizzling and damn there’s a lot of sexual tension. I quite enjoyed the banters between them. They’re the best part. Coming to the secondary characters, I also liked Carlos, Dean, and Parker’s friend Zoe. I would love to read their stories.

The plot was fun and entertaining. It might seem a bit cliched especially the misunderstanding part, but overall It was a fun book to read. The fake relationship trope was well done. I loved all the humor especially the witty banters. It’s a light hearted romance and I’m glad it wasn’t too emotional. I also liked the character development. The pace was good and the writing was great. The book was written in first person dual POV’s.

Overall, I quite enjoyed this book! It was a great collab and I hope we get more stories from this world because I need more Carlos and Dean.

If you like fake relationship trope and enemies to lovers trope then add this to your TBR list.