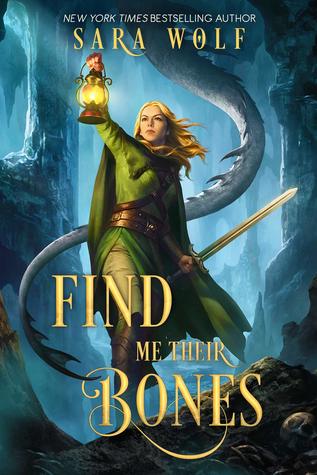 No one can save her.

In order to protect Prince Lucien d’Malvane’s heart, Zera had to betray him. Now, he hates the sight of her. Trapped in Cavanos as a prisoner of the king, she awaits the inevitable moment her witch severs their magical connection and finally ends her life.

But fate isn’t ready to give her up just yet.

With freedom coming from the most unlikely of sources, Zera is given a second chance at life as a Heartless. But it comes with a terrible price. As the king mobilizes his army to march against the witches, Zera must tame an elusive and deadly valkerax trapped in the tunnels underneath the city if she wants to regain her humanity.

Winning over a bloodthirsty valkerax? Hard. Winning back her friends before war breaks out? A little harder.

But a Heartless winning back Prince Lucien’s heart?

The hardest thing she’s ever done.

Find Me Their Bones was an entertaining sequel to Bring Me Their Hearts.  At first, I was a bit nervous that it wouldn’t meet my expectations, but I’m glad to say that It was pretty good. I enjoyed it. I really missed Zera and her snarkiness. Her character is what makes this whole series so much fun to read. And let’s not forget the gorgeous cover. The artist did a wonderful job. So far, this was my favorite. It perfectly depicts the story.

The story continues where it was left off in the first book. Zera Y’shennria finally reveals her true identity to Prince Lucien and her plan to steal his heart. She was supposed to kill him, but in the end she couldn’t do it. Feeling betrayed, Lucien hates the sight of her. With the sudden appearance of Lucien’s lost sister Varia, Zera is pardoned for her treachery, but she had to work for the king who’s preparing for the war against the witches. When Zera gets another chance to regain her heart, she wouldn’t fail even if it’s an impossible task such as  taming the dangerous valkerax trapped in the tunnels underneath the city.

I loved Zera even more in this book. She was guilty about lying to Lucien and her new friends Malachite, and Fione. I was a little angry with the way they ignored her and treated her like a monster. I know what she had done was wrong but still. She feels bad about losing their trust and tries hard to make amends with them especially Lucien. Because of her guilt over breaking his heart, she even tries to set him up with another girl. The  relationship between Zera and Lucien becomes complicated. There’s some hate vibes but the attraction is still there. I honestly loved their banters. Lucien was just amazing. He hates Zera for deceiving him, but we can clearly see that he still had feelings for her. The secondary characters added more fun especially Malachite. Can we have a spin-off with him as the lead. I almost forgot about Yorl, the celeon who aspires to become a polymath. Even though he was a bit rude, I still enjoyed the conversations between him and Zera.

Except for a few slow scenes, the plot was engaging throughout. The plot mostly centers around Varia’s hidden agenda, and the bloodthirsty valkerax. There’re some unexpected twists in the second half which I really loved. The hate-love romance between Zera and Lucien was a bonus. I’m a total sucker for them! The ending was intense, but I did expect something like that to happen. The author writing was addicting. The book was written in Zera’s first person pov. The world building and the magic was well done.

Overall, I loved this book! It concludes with a cliffhanger and really liked all the revelations at the end. Can’t wait for the third book!

If you love YA fantasy with morally grey and snarky heroines then you must read this series! I highly recommend it!