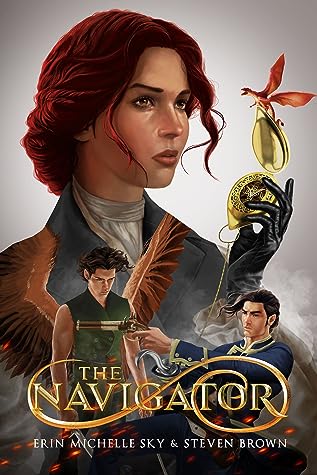 NOT EVERY ADVENTURE GOES AS PLANNED …

Wendy’s troubles are far from over. Hook wants her in irons, the crew wants to throw her overboard, and Pan’s magical compass is the only thing standing in their way. But Pan himself is nowhere to be found.

When a new everlost captain appears on the horizon, it will take everything Wendy has to survive.

And a tiny red dragon will set events in motion that could save or doom them all.

The Navigator is the second book in the Tales of Wendy series. First  of all, I’m really loving the covers in this series. They’re simply beautiful. Coming to the book, It was a good sequel, but honestly I didn’t enjoy it as much as I thought I would. There’s nothing wrong with the book, but the pace was a bit slow for my taste and I might’ve enjoyed it more if I wasn’t in a slump.

After the events in the first book, Wendy finally gets on-board a ship. Despite his crews disapproval, Captain Hook appoints Wendy as his navigator because she’s the only one who can take him to Peter Pan. Using the magical Compass, Wendy travels across the sea to find peter which eventually leads her to Neverland, a place no mortal has discovered. With the help of a flying ship and an unexpected ally, Hook wants to defeat Blackheart, the enemy of England.

Wendy was brave, smart, and daring. She’s a pretty likable and fun character. You’ll not get bored of her. Her character development was well done. She’s strong but at the same time vulnerable. Despite the crews disapproving gaze, she always stood strong and proved her worth as the Navigator. Peter is very adorable with his charming and childish personality but sometimes he might be a bit annoying. He admires Wendy and I think there’s some hidden feelings. Captain Hook is still broody, uptight, and complex. We see some change in his cold personality, and he starts to acknowledge Wendy’s skills. And also we finally get the backstory of Peter and Hook, and how they became enemies. In the second half, we meet some new characters which made the story even more interesting.

The plot was very much entertaining filled with adventure, action, and a little bit of feminism. It was slower than the first book. If you don’t mind slow paced reads, then you’ll definitely enjoy it a lot more than I did. There are surprising twists in the second half and I really enjoyed Tigerlilja’s character who’s sort of a viking woman. The writing was pretty good. As usual, the book was written in third person pov. The world building and magic was amazing. The author’s version of never-land was really fascinating. There’re dragons, mermaids, Imps, pirates, etc., I really want to explore more of this world.

Overall, I liked it! Although it’s not my favorite, I think it was a good sequel and I’ll definitely look forward to the next book.

If you’re looking for a good peter pan retelling, then definitely give this series a shot!