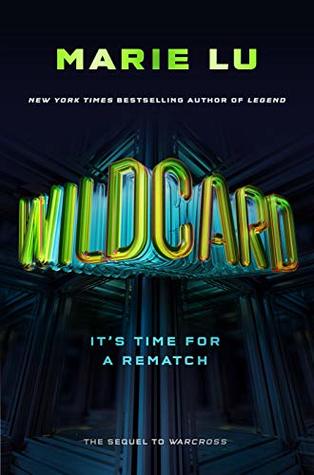 For the millions who log in every day, Warcross isn’t just a game – it’s a way of life. And teenage hacker Emika Chen has found herself caught up in a conflict that could change the world.

Warcross creator, Hideo Tanaka, wants to use to the game to control peoples’ thoughts and feelings, effectively ending free will – Zero, a mysterious (and dangerous) hacker, wants to stop him.

Now Emika must decide who she will fight for. The game is on .

“Every problem has a solution. But after every solution, there’s a new problem to tackle, some new challenge to take on. You don’t stop after you solve one thing You keep going, you find a new way and a new path, try to do better and create better.”

Wildcard was a thrilling sequel to Warcross. It’s a sequel filled with lots of surprising twists and turns. The plot was unpredictable unlike the first book. I’m glad the author focused a bit more on the secondary characters. The only issue I had with this book was the ending which felt rushed apart from that it was a good conclusion. The following review contains spoilers for the first book, If you haven’t read it yet then skip reading it.

The story picks up three days after the events in Warcross where Hideo triggers the algorithm which makes all the people who uses Henka Games new lenses are under his control. They’re unable to break the law or harm other person. Emika isn’t comfortable with Hideo playing god and controlling human emotions. She doesn’t want to be part of his plans so she quits. Soon she’s approached by the mysterious Zero who wants her to join him to stop Hideo’s plans. Emika is still uncertain about Zero and she can’t believe that he’s Sasuke Tanaka, Hideo’s lost brother. Emika doesn’t know whom to trust but in the end she had to make a choice and save the world.

Emika was still a great character who stood strong and fought for what is right. She’s a loyal friend and I admired her strong determination. Hideo is a very much stubborn and broody character. He’s still reluctant to stop the algorithm even after learning there’s some errors in it. He believes with his algorithm that he’s doing a lot of good to the people so he doesn’t feel guilty about controlling their emotions. I really liked Hideo’s character in this book. What he’s done is not right, but I still can’t seem to hate this guy because he doesn’t have evil intentions. I enjoyed Emika and Hideo together. After how they’ve parted ways in the first book, there’re some little hate vibes going on between them but their attraction had never faded. I also loved the Phoenix riders team! In this book, we get to know a bit more about Hammie, Roshan, Tremaine, and Ash. We’re also introduced to some new characters and my favorite was Ash. She was totally kickass! Sasuke was an interesting character who harbored many secrets.

The plot was very much engaging! Even though it was different than what I had expected it to be, I still enjoyed the whole journey. It has a slow start, the pace picks up speed as the story progresses. There’re a lot of surprising twist and turns in this book which kept me interested till the end. I really liked how the author focused more on the friendship aspect which was actually lacked in the first book. The ending felt rushed which was the only issue I had with this book. The book was written in Emika’s first person POV. The author’s writing was really good. The world building was great. I liked the idea of Dark world, a secret place where a lot of criminal and dangerous activities takes place like selling of illegal weapons, darkcross games etc. I really liked the Darkcross games, I wish there was more of it in this book.

Overall, I enjoyed it! It was fun ride filled with twists and turns, action, adventure, and romance. Marie did a great job in writing it! It’s not a total perfection but still a good conclusion to the series and I’ll definitely look forward to her next work.

I highly recommend this duology to all the people who loves action packed YA sci-fi books.

I highly recommend this duology to all the readers who loves action packed YA sci-fi books!