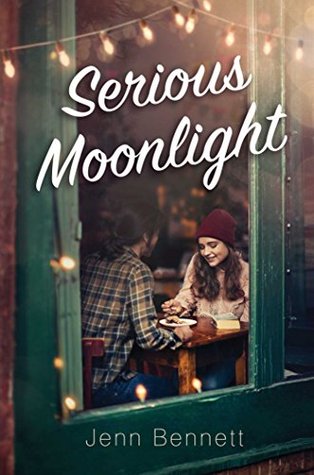 Mystery-book aficionado Birdie Lindberg has an overactive imagination. Raised in isolation and homeschooled by strict grandparents, she’s cultivated a whimsical fantasy life in which she plays the heroic detective and every stranger is a suspect. But her solitary world expands when she takes a job the summer before college, working the graveyard shift at a historic Seattle hotel.

In her new job, Birdie hopes to blossom from introverted dreamer to brave pioneer, and gregarious Daniel Aoki volunteers to be her guide. The hotel’s charismatic young van driver shares the same nocturnal shift and patronizes the waterfront Moonlight Diner where she waits for the early morning ferry after work. Daniel also shares her appetite for intrigue, and he’s stumbled upon a real-life mystery: a famous reclusive writer—never before seen in public—might be secretly meeting someone at the hotel.

To uncover the writer’s puzzling identity, Birdie must come out of her shell…discovering that most confounding mystery of all may be her growing feelings for the elusive riddle that is Daniel.

I loved Jenn Bennett’s Alex Approximately and Starry Eyes. Serious Moonlight was an enjoyable YA read with adorable characters but unfortunately it was my least favorite of her books. I honestly didn’t love it as much as the other books. However, I loved the diverse aspect in this book. One of the character has Narcolepsy and other other is Partially deaf. In this book, both of the characters try to solve a mystery surrounding a famous reclusive writer while trying not to fall for each other.

I enjoyed both main characters in this book but I loved Daniel Aoki’s character more than Birdie. Daniel is a Nineteen year old half Japanese and Half american. Some incident had left him partially deaf, so he has hard time hearing with only one ear. I found his character very adorable. He believes in fate and likes doing magic tricks. Birdie Lindberg is a eighteen year old curious and shy girl who likes solving crimes and she’s suffering from Narcolepsy, a neurological disorder that affects the control of sleep and wakefulness. It is characterized by overwhelming daytime drowsiness and sudden attacks of sleep. I’ve never read a book with a Narcolepsy character so her character was very refreshing to read  about the struggles they had to go through in their daily life. At the beginning, I didn’t like the way she treated Daniel. Like he was some plague and she tries to avoid him. The first meet between Daniel and Birdie kinda ended with a disaster. Birdie feels embarrassed about the incident but Daniel wants her to give him a chance. The relationship between them was sweet but I didn’t find the romance as swoon worthy as in the previous books of the author. The secondary characters were also nice and my favorite was Birdie’s Aunt Mona. She was hilarious and a awesome woman.

The plot was enjoyable filled with family drama, mystery, and romance. The story moved in a slow pace. The mystery aspect in the book was interesting but not strong enough. After halfway through the book, I predicted the major twist and I didn’t like how the ending was rushed. There’s no suspense build up and I found the mystery part distracting from the romance which is one of the major issues I had with this book. I might’ve enjoyed this book a lot more if there was no mystery element in this book and instead it was focused more on character development and family relationships. The writing was addicting. The entire book was written in Birdie’s first person POV and it was a little disappointing that we don’t get Daniel’s perspective. The setting was great. The book was set in Seattle, Washington. Birdie lived at Bainbridge Island, a small city which is connected to Seattle by Ferry. The author described the beautiful city in vivid detail.

Overall, it was a fun read with sweet romance and a dash of mystery! Jenn’s books are always sex positive and this didn’t disappoint me. Although I had some issues, for the most part I was really into it. So, I’ll definitely look forward to her next work.

I recommend this book if you’re looking for a diverse YA contemporary read with sweet romance. If it’s your first Jenn Bennett’s book then I would strongly suggest you to read her previous works first i.e., Alex Aproximately, Starry Eyes, and also The Anatomical Shape of a Heart. They’re amazing!