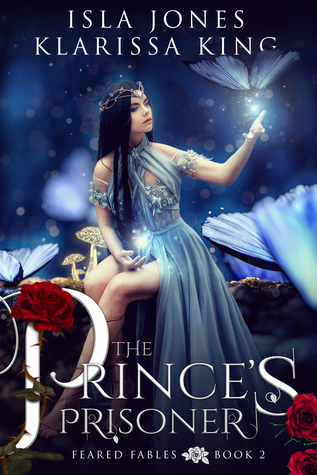 A dark fae prince. A stolen human girl.
And an unwanted marriage.
Not all beasts can be redeemed…

Callie doesn’t believe in fairy tales. Too bad they believe in her.
The fae whisk Callie and her friend off to be prisoners of an eternal dance. But Callie is stolen again.
Maybe the eternal dance wasn’t so bad after all…
A lethal fae has taken her as his unwilling bride, and she has to balance between life and death in his castle, while finding a way out of the dangerous fae realm. Only, she’s playing games with the Prince of War.
The Prince learns just how far Callie will go to save her friend from a lifetime of torture—and just what she will do to save herself from his clutches.
Callie must escape the wicked prince before she turns from prisoner to prey. But as the prince himself tells her, ‘Sacrifice is no noble thing in the fae realm.’
Everything in the fae realm comes at a price…

“When a fae loves,” he said carefully, reading her with a flickering expression, “it is so rare that it is eternal. And lethal.”

*ecopy received from the author in exchange for an honest review*

The Prince’s Prisoner is a Dark Fae Retelling of the original Beauty and the Beast, and is the second book in the anthology series, Feared Fables. It Can be read as a stand-alone.

I really enjoyed the first book in the Feared Fables anthology which is a retelling of the Red Riding Hood. When I was given an opportunity to review the second book in this series, I couldn’t resist because I’m a total sucker for B&B retellings and Dark Fae. It’s my favorite combination and this book didn’t disappoint me. I devoured this entire book in  one sitting. The story was so addicting. I wish it wasn’t a short read. I loved the characters, the plot, and the setting. It was really a good retelling and I immensely enjoyed it. And also love that gorgeous cover.

Callie and her best friend Meghan travel to Scotland for sightseeing. They stay at an old inn in a local Village. Meghan finds herself a hot date and leaves her for a private party in the forest. When she doesn’t return, Callie gets worried about her missing friend. After sometime she decides to find her herself.  She asks the tavern owner about the party in the forest and to her surprise  she warns her about the fae folk and tells her that those who enter the forest had never returned. Callie had never believed in supernatural and fairy tale stuff until she was whisked away into a fairy world and becomes the prisoner of the eternal dance. In the high court of fae, She catches the eye of the Prince of War who later tricks her into becoming his bride in exchange for his help.  Callie is determined to get back to her world with her friend and she’s willing to play his games until she gets her chance in freedom.

I really enjoyed Callie’s character. She’s smart, determined, and very much likable. She’s someone who wouldn’t give up easily and fights till the end. Her feelings towards her captor felt very much realistic. I was rooting for her from the start. I also loved Rain. He’s handsome, seductive, and deceitful fae. He’s the bay guy but I still loved his character. He’s the perfect anti-hero. He’s totally obsessed with Callie and tries hard to win her over. I seriously enjoyed every interaction between them. The relationship between Callie and Rain is a bit spoiler so I’m not going to give away anything but remember this is not a love story with some bad boy. I also enjoyed the secondary characters especially Angus. He was so adorable and smart.

The plot was very much engaging, well written, and entertaining! If you’re expecting this to be another ACOTAR then you’re in for a surprise. It is not your typical fairytale with a happily ever after but you’ll love it. The fae in this book are seductive, cruel, manipulative, deceitful, and lethal. They’re no Cardan, or Tamlin. The pacing was perfect. The story has kept my interest through the end. My only issue with this book was the ending felt a bit rushed. Nonetheless, It was a great read. I had a great time reading it. The writing was captivating. The book was told in third person POV. There’s not much world building in this book but it does have a nice setting.

Overall, I loved this book! It was a dark and refreshing take on the classic beauty and the beast tale. The ending has left me wanting for more. I can’t wait for the next book!

I highly recommend this book to all the readers who loves to read short dark stand-alone  retellings.