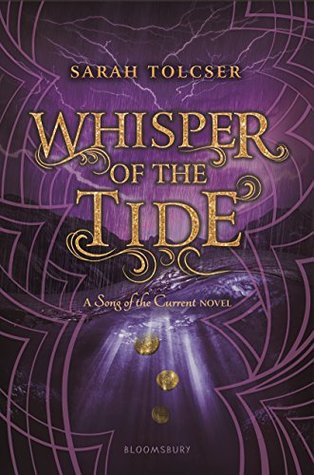 Caro and Markos have settled into a routine: Wake up, eat breakfast, and try to figure out who might attempt to assassinate Markos today . . . so the currents aren’t exactly calm. Markos is in constant danger, and his claim to the throne is shaky without the support of an army. But then a powerful Archon offers Markos the military might he needs in exchange for marrying his daughter. Markos and Caro must decide which is more important: their love for each other or the fate of Akhaia.

With shipwrecks, lost treasure, old and new enemies, dark magic, and breathtaking romance, Sarah Tolcser weaves another epic story about chasing your fate and charting your own course.

“You had to know what you wanted – but knowing wasn’t enough. You had to be willing to fight for it. To be so strong even the sea could not defy you. That is how strong we must be, to keep the things we love.”

Last year, I read Song of the Current and I absolutely loved it. It was a great debut. When I heard there’s a lost treasure hunt involved in this sequel, I’m so ready for it. Whisper of the Tides is not only a fun sequel but also a good conclusion to this series. I loved getting back into this world and meeting the characters once again. I quite enjoyed this book as much as the first one. It has a perfect amount of  adventure, romance,  humor, snark, and action but the one thing that made this whole journey a fun ride is definitely the dynamic between Caro and a certain Conniving Pirate. These duo reminded so much of Elizabeth Swann and Jack Sparrow from Pirates of the Caribbean. I loved their relationship and their snarky banters.

Caro’s adventure continues in this sequel where she helps Markos in his campaign and also becomes his protector to look out for any assassination attempts from their enemies. Markos is called pretender even though he’s a legitimate heir to the throne. He needs an army to fight against Konto Theucinian, but no one wants to risk a war by supporting a young prince except for one Powerful Archon who is willing to support Markos’s claim to the throne if, in exchange, he accepts his daughter’s hand in marriage. Now Caro and Markos needs to decide which is important, their love or the throne. Caro always belonged to the sea and she never fitted to be an emparchess so she finally makes the painful decision for both of them which eventually leads Caro to another dangerous adventure.

I loved Caro even more in this book. Her character growth was very well done. After the events in the first book, She was kinda confused about where she fit in and where her true destiny lies. She Struggled while making hard decisions but she always stood strong. She’s not perfect and made mistakes but that’s what makes her so real. Markos is a delightful character. He’s always sweet, fun and charming. He’s kinda secondary character in this book because he had less part in this book. I still enjoyed the swoony romance and fun banters between him and Caro. I liked Kente, Caro’s cousin who wields shadow magic. She was there for her whenever Caro needed help. I really wish she had more part in this book because she’s really an amazing character. I also liked the Snarky Sea Goddess who loves taunting Caro.  And finally, we have a surprising new character in this book who stole the show. He’s a great addition to the plot and I really didn’t expect to see him again. He has an intriguing and fun personality. I really enjoyed his character a lot. I’m not revealing his name because it’s kinda spoilery. If you like Jack Sparrow then you’ll definitely love this guy.

The plot was very interesting and engaging throughout. It has a slow start which I’m really not fan of, but after the mysterious shipwreck, I was hooked to the plot till the end. There were so many twists and turns in the book that kept me on the edge of my seat. The whole story felt like an adventurous ride. There’s a lot of sea adventure in this book and I enjoyed every minute of it. The writing was pretty good, but to be honest I struggled with the writing in the beginning. The book was told in Caro’s first person pov. I enjoyed reading the story from Caro’s POV, but I think this would’ve been even more enjoyable if it was written in multiple POV’s. The world building was amazing. It was one of the best aspects of this series. The world of riverlands is an enchanting world filled with magic, myths, gods and goddesses, sea creatures, and pirates. I wish we could explore more of this world.

Overall, I loved this book! It’s a total entertaining read filled with adventure, magic, romance, pirates, ships, and treasure hunting. The story wrapped up perfectly with a satisfying ending. I’m really gonna miss this world and the characters. If there’s ever a spin off of this series in the future, I would definitely read it. I can’t wait to know what the author has in store for us next.

Many people are unaware of this duology, but It’s really a great read and I highly recommend it if you’re into YA fantasy books with Sea Adventures, Pirates, magic, and a swoony romance.