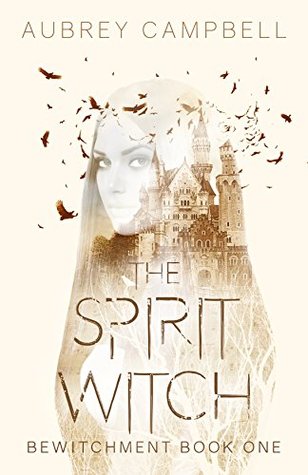 BOOK TITLE: The Spirit Witch (Bewitchment #1)
RELEASE DATE: April 13th 2018
GENRE: Young Adult, Historical Fantasy, Gothic, Magic
AUTHOR: AUDREY CAMPBELL
BLURB:  On her wedding day, Charlotte de Winter carried a crossbow as she walked a lone dirt road in the middle of a pine forest on a snowy night. She wasn’t saying her vows as she had hoped. Instead, she was hunting the monster who killed the man she loved. But there’s only a small window of opportunity to bring Alexander Prescott back from the dead. And breaking a curse isn’t easy, especially for a seventeen year old witch who has so many spells left to learn before her knowledge of witchcraft is complete.
Can Charlotte save Alexander from his cruel fate? Or will this monster with the power of death and darkness at his command destroy her magic entirely?

MY REVIEW:  I love books that gives horror, dark, and gothic vibes and this one didn’t disappoint me. It was a gripping story and I quite enjoyed it! I loved Charlotte de Winter! She’s a brave and strong protagonist who’s very much determined to save her loved ones and will not give up till the end. I liked the plot. It was interesting enough to hold your attention throughout. The story starts with a bride holding a crossbow in the middle of a forest at night hunting for the monster who killed her bridegroom Alexander Prescott. It’s a pretty interesting start and then we meet the deadly monster who’s very creepy and cunning but there’s a twist that I didn’t saw coming. She is a seventeen year old witch who doesn’t have any experience with powerful spells but still she’s determined to break the curse and bring back her lover from the dead. There’s not much world building in this book but it’s okay I don’t have any complaints because it’s a short read. The writing was easy to understand. The magic was very interesting. The story felt a little bit dragged at few parts but overall, it was a good read and I might check out the next book.

RECOMMEND TO: Everyone who likes historical fantasy books filled with dark gothic vibes.
MY RATING: 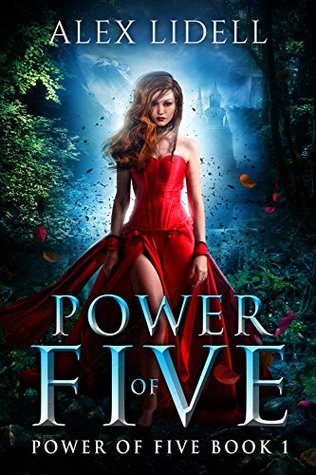 BOOK TITLE: Power of Five (Power of Five #1)
RELEASE DATE: May 04th 2018
GENRE: New Adult, Fantasy, Reverse-Harem, Romance
AUTHOR: ALEX LIDELL
BLURB: Four elite fae warriors. One mortal female. A magical bond they can’t allow—or resist.
Orphaned and sold to a harsh master, Lera’s life is about mucking stalls, avoiding her master’s advances, and steering clear of the mystical forest separating the mortal and fae worlds. Only fools venture into the immortal realms, and only dark rumors come out… Until four powerful fae warriors appear at Lera’s barn.
River, Coal, Tye, and Shade have waited a decade for their new fifth to be chosen, the wounds from their quint brother’s loss still raw. But the magic has played a cruel trick, bonding the four immortal warriors to… a female. A mortal female.
Distractingly beautiful and dangerously frail, Lera can only be one thing—a mistake. Yet as the males bring Lera back to the fae lands to sever the bond, they discover that she holds more power over their souls than is safe for anyone… especially for Lera herself.

MY REVIEW:  I’m familiar with Alex Lidell’s YA fantasy books so I thought I would love this book because I love Fae and Reverse Harem novels but unfortunately, I didn’t enjoy it as much as I hoped. I’m not fond of insta-attraction, the plot failed to hold my interest and some parts felt rushed but my main issue was that I couldn’t connect with any of the characters. Otherwise, It’s really a good read and I think many people would definitely love it. So it’s a case of it’s not you, it’s me.  Lera is a likable character who’s vulnerable yet strong. She’s an orphan since young who’s later sold to a harsh master. She led a hard life by cleaning mucks and avoiding her master’s advances but it all changes when she meets the four elite fae who claims that she’s one of their bonded warrior. Well, we’ve four interesting fae characters River, Coal, Tye, and Shade. River is the commander of the group who doesn’t want to accept a mortal woman as their fifth.  Coal is the broody and cold fae who doesn’t let his feelings show on the outside. Tye is a total womanizer who can’t stop flirting with Lera. Shade is a fae in mourning who refuses to shift back from his wolf form to his original fae form after the death of his twin Kai, their fifth warrior who died a decade ago. They all can’t resist their pull towards Lera but they can’t risk a mortal’s life who might not be able to handle their powerful magic so they all decide to break the bond. Hence they all journey together to the fae lands to sever the bond but as they spend more time with her, their desire for her grows even more and they don’t want to let  her go. They all sound pretty good, right? but my favorites are definitely River and Coal because I like dark and broody guys in my romance more than the fun types. The romance was quite steamy and I really hope it’s not a group thing because I totally detest them. The fae world the author created was intriguing and the magical aspects seemed very interesting but I wish the author provided more info on them. Overall, this was an Okay-ish read for me but I highly recommend it to all the Reverse Harem fans cause you might enjoy it more than I did. 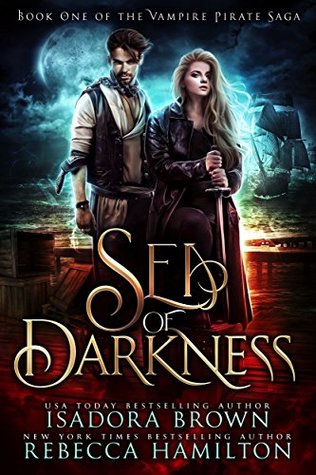 BOOK TITLE:Sea of Darkness(The Vampire Pirate Saga#1)
RELEASE DATE: May 10th 2018
GENRE: Fantasy, Adventure, Paranormal, Vampires, Romance.
AUTHORS: ISADORA BROWN, REBECCA HAMILTON
BLURB: An unexpected partnership changes everything
Sea Slayer Kelia Starling has grown up with one truth: Sea Shadows are vicious creatures that need to be eradicated. No exceptions. Not even for him.
The Society’s sole purpose is to protect the general population from supernatural monsters, and Kelia’s their top Slayer. But when her father is murdered and her handler insists it’s suicide, she starts to question whether The Society really has her best interests at heart.
Now, to solve her father’s death, Kelia must work with an unexpected ally: Drew Knight, an infamous Sea Shadow and the most beautiful creature Kelia has ever set eyes upon. A Sea Shadow who, without intending to, just may show her who the real enemy is…and it’ll only cost her one unnamed favor to be collected at a future date.
But after her affiliation with Drew Knight is discovered, Kelia is forced to choose between what she’s known since the beginning of her existence…or a dark, terrifying truth that puts her life at risk.

MY REVIEW: I’ve mixed feelings about this book! It wasn’t bad but it wasn’t great either. I’ve never read a book that has vampire pirates so I really wanted to give this a shot. It has an interesting plot, but the problem was the story didn’t excite me that much. Nevertheless, it was an enjoyable read. Keira Starling is a top slayer who hunts sea shadows aka vampires. When her father dies mysteriously she strongly believes that his death is not a suicide but no one believes her, so, in order to find the answers, she makes a deal with the enemy which is totally against the Society’s rules. During her search, when shocking secrets are revealed, Lera doesn’t know whom to trust and she starts to realize everything they had known were actually lies. I loved the main protagonist Keira. She’s clever, stubborn, determined and also a bit short tempered. She’s a pretty tough cookie who wouldn’t break even after going through a lot of abuse. Drew Knight is a very intriguing and mysterious character. He’s a dark, handsome, and deadly vampire who harbors many secrets. He’s an old vampire and no one can resist his allure especially woman. When Keira meets Drew for the first time, she could feel the pull but she tries very hard to resist him. She doesn’t trust him, but  he’s the only one who can help find her father’s murderer. With each encounter, Keira begins to trust Drew and she’s surprised to find that he’s really not what she had heard about him. The romance between Keira and Drew is definitely a slow burn but I didn’t feel that spark. I wish they had more interactions. The supporting characters aren’t fleshed out enough. So I didn’t cared much about them. The writing was good and the world building was perfect for the story. Overall, I really liked it but I don’t love it.

RECOMMEND TO:  Fantasy lovers who likes Sea adventure novels with vampires.
MY RATING:

So, this was my first time doing mini reviews because reviewing every damn book I’ve read is taking a lot of time and I want to invest most of my spare time on reading not reviewing.

Anyway, Have you read any of these books above? Are they in Your TBR? Do you plan to read them?
Let me know in the comment’s below!  ❤

17 thoughts on “Mini Reviews: The Spirit Witch, Power Of Five, Sea Of Darkness”