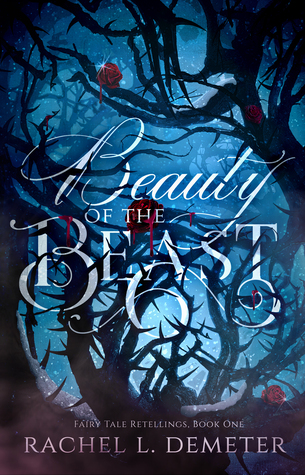 A BEAST LIVING IN THE SHADOW OF HIS PAST

Reclusive and severely scarred Prince Adam Delacroix has remained hidden inside a secluded, decrepit castle ever since he witnessed his family’s brutal massacre. Cloaked in shadow, with only the lamentations of past ghosts for company, he has abandoned all hope, allowing the world to believe he died on that tragic eve twenty-five years ago.

A BEAUTY IN PURSUIT OF A BETTER FUTURE

Caught in a fierce snowstorm, beautiful and strong-willed Isabelle Rose seeks shelter at a castle—unaware that its beastly and disfigured master is much more than he appears to be. When he imprisons her gravely ill and blind father, she bravely offers herself in his place.

BEAUTY AND THE BEAST

Stripped of his emotional defenses, Adam’s humanity reawakens as he encounters a kindred soul in Isabelle. Together they will wade through darkness and discover beauty and passion in the most unlikely of places. But when a monster from Isabelle’s former life threatens their new love, Demrov’s forgotten prince must emerge from his shadows and face the world once more…

Beauty and the Beast is my all time favorite fairytale that I’ll never get tired of and I always love reading its retellings including the ones that are set in modern world but I mostly like to read the ones that are placed in historical or fantasy setting. I haven’t heard of Beauty of the beast before but when I accidentally came across the cover reveal of this book, I couldn’t tear my eyes off it. The cover definitely looks beautiful and captivating with its thorns and roses. I can also see that this book is slowly gaining popularity. Anyway, personally I enjoyed reading this book and It’s kinda darker than the normal retellings so it’s highly advised to read it with caution because of certain scenes in the book.

Prince Adam Delacroix is only eleven years old when his parents were brutally murdered leaving him severely scarred. Even after twenty five years, he is still living a secluded life in a ruined castle far away from the people and the town. Isabelle rose lives with her two greedy step sisters and her loving father who is now sick and blind. With no financial aid to help with her father’s sickness, Isabelle is left with no choice but to agree to marry the handsome Raphael Dumont, a vile creature who had some kind of mad obsession with her. When Raphael takes it too far, Isabelle and her father decides to escape from him and when a sudden snowstorm struck them during their journey, Isabelle comes across a run down castle and decides to take shelter until the storm passes but when the mysterious stranger in cloak who is living in it is totally against it, she wouldn’t back down easily and eventually he gives in. During their stay, when tragedy struck her, Isabelle blames Adam and since then she couldn’t face him but eventually they slowly open up to each other and develops a mutual bond which grows into something more. When Isabelle’s past finally catches up with her, can Adam finally forget his old demons and save her before its too late?

I loved Isabelle! She’s a strong female protagonist who is stubborn, feisty and fearless. She’s one of those heroines who wouldn’t give in without a fight but she also got a vulnerable side to her that makes her more realistic. Adam is a great character. He’s a broody, angry and aloof guy who has hard time in trusting others and he has a pet dog named Stranger, his only companion in the entire castle. His horrifying past has left him scarred on the outside and broken in the inside. When Isabelle comes into his life somewhere in his lonely heart he finds hope. The relationship between Isabelle and Adam is complicated at first but eventually they start to open up to each other and their grief brings them even more closer. The romance is definitely slow burn and I’m glad that it isn’t insta-lust or insta-sex thing which happens in most of the adult reads. I enjoyed how their relationship grew from friendship  to love. There is lots of sexual tension between them and their chemistry is definitely hot, steamy and swoon worthy. The way they are enamored with each others beauty seemed a bit over dramatic sometimes but I wasn’t bothered with it much. As for the secondary characters, I hated Raphael and his mistress Vivian. Raphael is  beautiful on the outside but totally ugly on the inside. He’s not only a drunk but also has lots of issues. Vivian is a bitchy character who likes Raphael and she hates Isabelle because of his obsession with her.

The plot is well written and beautiful! It’s a mix of three wonderful tales Beauty and the Beast, Cinderella and the phantom of Opera. The dark and realistic twist of the tale made the story even more interesting to read. The pacing is perfect and I never got bored while reading it. I liked the dual pov of the book and the writing style is simply beautiful but I did find some parts repetitive which kinda annoyed me a bit but not enough to hinder my enjoyment. The world building is good but honestly, I wasn’t really paying much attention to it because my focus was mostly on Adam and Isabelle. I also loved the character development of Adam who has turned from bitter angry person to sweet, loving and caring person.

Overall, I loved it! This is really an emotional dark tale and it’s definitely going to one of my favorite B&B retellings list. I immensely enjoyed it and I can’t wait to know what the author has in store for us next.

I highly recommend this book to everyone who is  above 18 years of age because of strong sexual content, profanity and a attempted rape scene. If you’re comfortable with the above aspects then definitely give this a try.