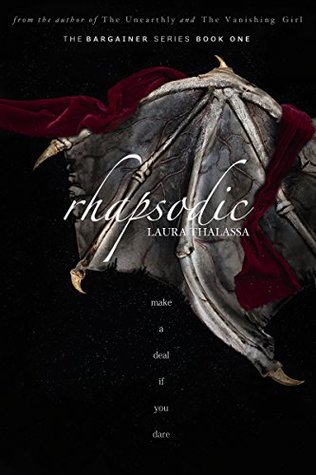 RELEASE DATE:  November 15th 2016
AUTHOR: Laura Thalassa
GENRE:  New-Adult, Fantasy, Fairies, Romance.
PUBLISHER: Lavabrook Publishing Group
SUMMARY: Callypso Lillis is a siren with a very big problem, one that stretches up her arm and far into her past. For the last seven years she’s been collecting a bracelet of black beads up her wrist, magical IOUs for favors she’s received. Only death or repayment will fulfill the obligations. Only then will the beads disappear.

But for one of his clients, he’s never asked for repayment. Not until now. When Callie finds the fae king of the night in her room, a grin on his lips and a twinkle in his eye, she knows things are about to change. At first it’s just a chaste kiss—a single bead’s worth—and a promise for more.

For the Bargainer, it’s more than just a matter of rekindling an old romance. Something is happening in the Otherworld. Fae warriors are going missing one by one. Only the women are returned, each in a glass casket, a child clutched to their breast. And then there are the whispers among the slaves, whispers of an evil that’s been awoken.

If the Bargainer has any hope to save his people, he’ll need the help of the siren he spurned long ago. Only, his foe has a taste for exotic creatures, and Callie just happens to be one.

Before I get into my review, lets talk about the Irresistible cover. I freaking loved the beautiful cover of this book!!! It looks so darkly wicked especially the wing with talons on its end. It’s the first thing that caught my attention and after reading it’s synopsis, I knew nothing’s going to stop me from reading this. The Bargainer in this book is actually a dark fae and he reminded me so much of Rhysand from ACOMAF, except for the hair color they are so similar that they could be brothers. Laura Thalassa never fails to impress me with her unique plots and she did it again with this incredible read. Every aspect of this book has captivated me especially the romance which was sizzlingly hot.

The story follows a women named Callypso Lillis who is a siren, a mythical creature who can control anyone with her voice. She had a rough past when she was young and currently works as a private investigator. When Callypso was young she asked for a favor from bargainer aka Des which eventually leads to asking more favors from him. With each favor, her debt to him keeps on growing as well as the onyx beads up her wrists. They are magical IOUs for favors she’s received. Only death or repayment will fulfill the obligations. Only then will the beads disappear. When her past suddenly catches up with her after seven years, Callie’s whole world changes again. The Bargainer is back again to collect his debt after his sudden disappearance seven Years ago. Callie never thought that she would enter the Otherworld along with the dark fae aka Des who seems to need her help in resolving a matter that is making unrest in his kingdom. Callie thought she could pay all of her debt with her help, but while fighting against a wicked enemy, she also had to fight her unresolved feelings for Des.

I really liked Callypso Lillis! Not only she was a strong and independent women, she’s also a survivor and fighter who has gone through a horrifying past when she was young. She’s a siren with a hypnotizing voice and a beautiful face that never fails to grab every man’s attention.  The Bargainer aka Des is quite mysterious, dark and sexy character who harbors many secrets. At the beginning, we only know him as a bargainer with a mysterious personality but as the story progresses we get to know the real identity of him. As for the romance, I never expected this to be a slow burning romance with lots of angst. I loved how their relationship grew from friendship, lust to love. The romance between them is sensual and sizzling hot. As for the secondary characters, I loved Callie’s best friend, Temper who is quite a fire cracker and I absolutely liked her sense of humor. I hated the werewolf boyfriend of Callie who seemed very possessive. Coming to the villain in this book, he is downright creepy and nutso.

The plot was quite addictive and interesting! Although few parts are predictable, there are also lots of things that I never saw coming. The pacing of the story is very well done.  Though most of the book was focused on the relationship between Callie and Des, there is also a mystery surrounding the disturbance in the otherworld regarding the disappearance of the warrior fae woman. The writing style of this book is beautiful and I very much enjoyed it. The world building is fascinating! I loved the world the author has created especially the floating Island and it’s cities in the Kingdom of Night. Now I really can’t wait to explore the Kingdoms of day, Fauna and Flora.  The story was told from Callie’s alternative POV shifted from Past and Present which eventually brought more intrigue to the story.

Overall, It was a captivating read and I immensely enjoyed it! The book finally concluded with a clean end without any torturous cliffhangers but the journey hasn’t ended yet and I’ll definitely look forward to the next book.

I highly recommend this book to all the book lovers who loves to read Paranormal Romance.

3 thoughts on “Rhapsodic (The Bargainer #1) By Laura Thalassa [Review]”