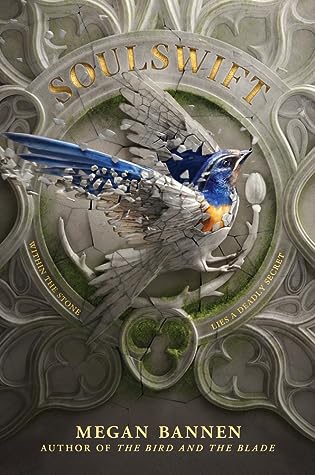 Gelya is a Vessel, a girl who channels the word of the One True God through song. Cloistered with the other Vessels of her faith, she believes—as all Ovinists do—that a saint imprisoned Elath the Great Demon centuries ago, saving humanity from earthly temptation.

When Gelya stumbles into a deadly cover-up by the Ovinists’ military, she reluctantly teams up with Tavik, an enemy soldier, to survive. Tavik believes that Elath is actually a mother goddess who must be set free, but while he succeeds in opening Her prison, he inadvertently turns Gelya into Elath’s unwilling human vessel.

Now the church that raised Gelya considers her a threat. In a race against the clock, she and Tavik must find a way to exorcise Elath’s presence from her body. But will this release stop the countdown to the end of the world, or will it be the cause of the earth’s destruction? And as Tavik and Gelya grow closer, another question lingers between them: What will become of Gelya?

This book had left me emotionally wrecked. It was my first book by the author, and I was very impressed. The story was simply beautiful. I really enjoyed the concept, the characters, and the plot. It was overall a great stand-alone read, even though the ending had left me pretty sad.

The story takes place in a fantasy world where Northern Kingdoms believe in the Ovin religion, and the Southern believe in Mother Elath. These two religions clash together because of their different opinions on Mother Elath. The Ovinists believes Mother Elath is a demon that needs to be imprisoned, and the Southern people believes that she’s a goddess of life and must be freed. It was rumored that her soul was imprisoned somewhere in a mountain by the Ovinist knights.

Gelya is a daughter and a vessel of the true father. She’s basically a nun who’s brought up in a convent. She has a unique power to imbue feelings by singing religious verses. When she accidently frees Elath’s soul through her song, she becomes the unwilling vessel and gets kidnapped by Tavik, a kantari soldier who was brought to their monastery as a prisoner. Now the church believes Gelya as a major threat that needs to be eliminated. Hunted by her own people, Gelya and Tavin journey together to find a way to exorcise Elath’s soul from her body.

I loved both of the main characters! Gelya is a naive, meek, and caring girl with a strong heart. She lived a sheltered life and don’t know anything about the outer world. On the other hand, we have Tavik, a loyal soldier who’s very much determined to free mother elath and save their land. I loved the relationship between Gelya and Tavik. They both come from different worlds, and have different beliefs, and opposite personalities. During their journey, they develop a strong bond, and with each day they grow more closer. I quite enjoyed their witty banters, and their fake marriage part. The romance was well developed, and it was definitely one of the best aspects of this book.

The plot was beautiful, emotional, and well written. The pace was a little slow, but the characters had kept me engaged throughout the journey. The story mostly revolves around religious beliefs and mythology. If you aren’t comfortable with that part, then better skip this book. The author’s writing was beautiful and easy to follow. I’m glad it’s not written in unnecessary purple prose. The book was written in Gelya’s POV. The world building was intriguing and not too complex. I loved the myths, and the fictional religions. It was a bit confusing at the beginning, but it gets easier as the plot progresses.

Overall, I loved this book! I usually avoid books that heavily revolves around religion, but I’m glad that I still gave this a shot. It was a wonderful story and I honestly wasn’t ready for that bittersweet ending, but it was a good conclusion.