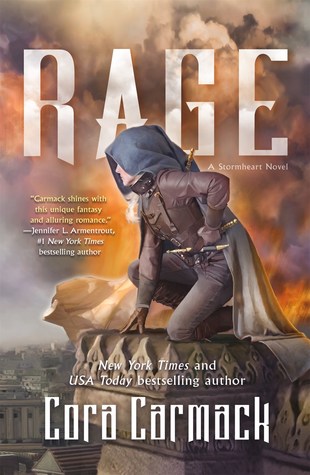 If Aurora knows anything, it’s that choices have consequences. To set things right, she joins a growing revolution on the streets of Pavan.

In disguise as the rebel Roar, she puts her knowledge of the palace to use to aid the rebellion. But the Rage season is at its peak and not a day passes without the skies raining down destruction. Yet these storms are different—they churn with darkness, and attack with a will that’s desperate and violent.

Well, this was an interesting sequel to Roar, but honestly it wasn’t as amazing as the first book. I have mixed thoughts about the mc but the others are pretty good. The characters that I enjoyed the most were Cassian, Novaya, Jinx, and the stormlord. I also liked the new addition of characters which made this series more interesting. After two  years, I loved getting back into this world of Pavan filled with Storm magic. There are witches, witch hunters, Stormlings, and a Stormlord who’s thirsty for revenge.

I don’t hate roar but she really annoyed me with her stupid actions. She acted reckless which put the others life in danger. She never felt the need to reveal her true identity to the crew even though they’ve risked their lives to help her. Add to that, she was plagued with self doubt and worries that Kiran would leave her because she was a royalty. So yeah her behavior was a little bit irrational in this book but don’t worry it’ll not affect your overall reading enjoyment because there’re other characters that’ll keep you engaged to the story. Kiran has become quite protective of Roar. He was hopelessly in love with her but poor guy didn’t even know that she wasn’t completely honest with him. I was looking forward to the scene when it was finally revealed and it was as I thought it would be. He was heartbroken. Coming to Cassian, he wasn’t entirely a bad guy who was obsessed with roar. He’s just worried that she was kidnapped. He has good intentions but the way he executed them was wrong. if you want me to choose between Cassian and Kiran, I would pick Cassian because i’m into broody guys, but I wouldn’t ship him with Aurora. We also get to know more about Novaya who’s been kept in the dungeons since Aurora’s disappearance. She has anxiety and doesn’t know how to control her power. Thankfully Jinx helps her, and boy sparks fly between them. She was a pretty fun and snarky character. I really enjoyed the new relationship between her and nova. The villain in this book the stormlord was quite complex and mysterious. I would love to know more about him. We also meet some interesting new set of characters in the second half.

Plotwise we didn’t get anywhere, but we finally had some answers that was a mystery in the first book. I don’t know for everyone but the pacing seemed a bit slow to me. A lot of chapters felt like fillers. The ending was rushed. The romance between roar and kiran was hot especially the forest scene which reminded me of their first making out scene in the first book. Except for the rescue missions, there’s not much action in this book but atleast I’m glad we had some more magic. Besides storm magic, we also get to see some other elemental magic like earth, fire, and water. Jinx is a earth witch and she was a total badass in this book. The author’s writing was addicting. The book was written in multiple perspectives. We’re introduced to a new mysterious character named Cruze. I enjoyed reading his part and l’m curious about rest of his journey. The world building and the magic system was amazing, as always.

Overall, it was a good sequel but I wouldn’t say it was the best. I loved the world, the new characters, the magic, the romance, and the adventure. After that surprising twist at the end(which I didn’t like the way it was executed), I can’t wait to know how this series finally ends. I’m hoping there’s more action, adventure, and storm battles.

I would highly recommend this series if you’re looking for an adventurous YA fantasy with great world-building and magic system.