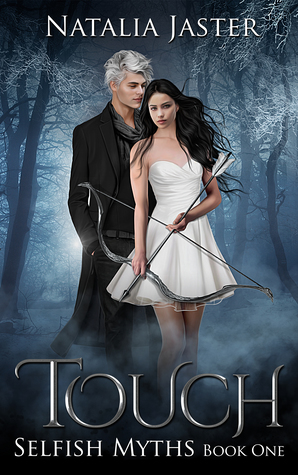 Love is an immortal bad girl. With a mischievous smirk and a strike of her arrow, she pins human hearts together.But Love has never loved. Not until she wreaks havoc in a frostbitten forest, hunting for the perfect mortal amusement.
Yet Andrew isn’t an easy target.

He doesn’t care that she’s a goddess. He’s a defiant loner who refuses to be toyed with.
The longer Love knows Andrew, the more she craves his touch.It’s forbidden. Worse, it’s fatal.
Humans don’t have the power to annihilate deities. But Andrew is different. He wields a magic greater than he knows, a force strong enough to eradicate her kind.
By order of the Fates, Love has only two choices.
One, destroy Andrew before he destroys her world.
Or two, contain his power.
The price: In order to weaken him, she must seal his heart with someone else’s.

“Touching this boy would be the death, and life, of her.”

After finishing Natalia Jaster’s The Foolish Kingdom’s series, I wanted to give this a series a shot because I really liked the premise and that cover looks so pretty. Touch is the first installment in the Selfish Myth’s series. It’s a unique retelling of Cupid and Psyche myth set in a modern world. So far I’ve read three retellings and this was my fourth one and I quite enjoyed it. Although I didn’t love it as much as Trick(first book in the foolish Kingdoms), I had a great time reading this book. I really liked the main characters, the lyrical writing, and the wintry setting.

Love and Andrew are enjoyable characters. Andrew is a handsome guy and a loner with one disabled leg. He lives with his step father who treats him like shit. When he meets a mysterious girl in a forest, he can’t help but thinking about her. Love is a immortal bad girl. She doesn’t like following rules and craves for a human touch and love but sadly they couldn’t see her or touch her. Her only job is to be make two people who’re matched to fall in love with each other with the help of her arrow. One day, when she stumbles across a human boy who can actually see her, her fate changes. Despite everyone’s warnings, they make an unlikely relationship which soon develops into something more but they can never be together without consequences.

The plot was unique and enjoyable. It’s not a fast paced read but I would’t say it was slow either. It was somewhere in between.  The entire cupid myth’s concept was very interesting. The romance between Love and Andrew was adorable and sweet. The entire story definitely had that modern fairytale vibe and I really liked how everything wrapped up in the end. This book also has some interesting side characters and  I’ll definitely look forward to all of their stories. As always, the writing was lyrical and captivating. The book was written in third person perspective. Coming to the world building, it was really good. I found the whole wintry setting beautiful. This would make a perfect fall read.

Overall, I enjoyed reading this book! It was fun, adorable, and romantic. I can’t wait to read Anger’s stories because I love broody heroes.

I would recommend this book to everyone who loves paranormal romance and fantasy retellings.
WARNING: *Mature young adult/new adult: sexual content and language. For readers 17 and older.* 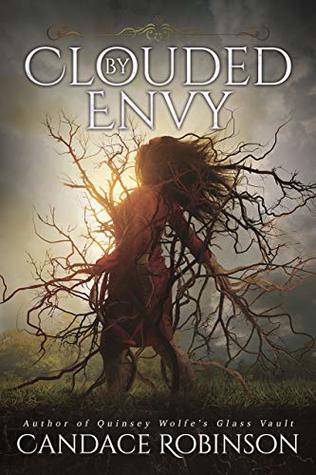 Brenik has always been envious of his twin sister, Bray. Growing up as fairy-like creatures, known as bats, everything came easier to Bray. While Brenik spent his time in her shadows, never feeling he was enough. After escaping their world of Laith, and living on Earth for ten years, Brenik attempts to strike a deal with the Stone of Desire to become human. Though true humanity is not an option, he will accept the curse that will alter him to get as close as he can.

Living in a tree trunk for the past year hasn’t been easy for Bray, more so after her brother disappears again. When a human boy and his brother, Wes, find her, a new friendship is struck. Through Wes, Bray learns there can be more to life than waiting within a tree. But worrying over where Brenik has vanished to always remains in the back of her mind.

When Bray reunites with Brenik, she realizes she must help him break the curse after she discovers the need for blood is beginning to overpower him. The curse not only damages those who get close to Brenik, but it could also destroy whatever is blooming between Bray and Wes.

“The envy needs to cease, or it will destroy everything that is a part of you.”

This was my first Candace Robinson’s book and I’m sorry to say that I didn’t love it as much as I hoped. I really liked the characters and the unique concept of the book but everything seemed rushed especially the second half. I wish it was a bit longer and there’s more detail about the magic and the world. Sometimes it was a bit confusing for me.

This book was about Brenik and Bray, two siblings/bats from a mystical land called Laith. They both jump into the human world to escape from the hunters who already killed their entire family. Brenik was always been envious of his Older sister Bray and in the human world he becomes jealous of her sister’s ability to turn into a human. So he attempts to strike a deal with the Stone of Desire to become human without caring about the consequences. Soon he becomes a creature that needs blood to survive. When he starts to lose himself, he begs his sister for help. Bray loves her little brother and she will do anything to help him break the curse, but it’ll destroy her relationship with the people she has come to love.

I honestly liked the characters, but I couldn’t emotionally connect with any one of them. Bray was a protective sister who loves her brother deeply even though he was such a jerk to her sometimes. Her selfless and sweet nature was very admirable. Brenik is a pretty complex guy who has a darkness inside him. Although I didn’t like him, I felt sympathy for him. Wes is a good hearted guy who likes Bray. His little brother Luca is his only world. I loved Luca! He was simply adorable. I really liked his friendship with Bray. I think it’s one of the aspect that I enjoyed the most in this book. The romance between Wes and Bray was okay-ish. It nearly seemed like a insta-love because they do develop feelings pretty quickly. I was slightly disappointed that this book focused very less on the romance because I wanted more Wes and Bray.

The plot was okay but the execution could’ve been better. So many things felt rushed and the ending was sort-of weird. Is this book a prologue to a new series? And I really liked the Dorian Gray twist, it’s another thing that I really enjoyed. I couldn’t predict the major twists in the book which was a good thing. The writing was not bad. The book was written in Brenik and Bray’s POV’s (third person). The setting was okay-ish but coming to the myths and magic, I was really confused. We don’t get much info about their origins.

Overall, it was a decent urban fantasy read! Although it’s not my favorite, I think many people would love it. So if you want to read it, then definitely give it a shot.