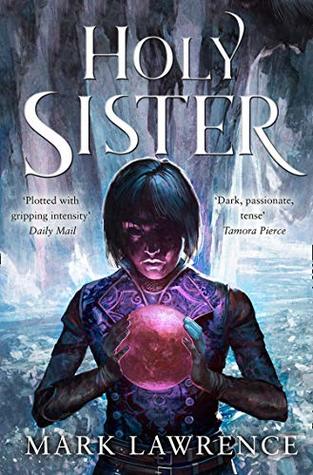 The ice is advancing, the Corridor narrowing, and the empire is under siege from the Scithrowl in the east and the Durns in the west. Everywhere, the emperor’s armies are in retreat.

Nona faces the final challenges that must be overcome if she is to become a full sister in the order of her choice. But it seems unlikely that Nona and her friends will have time to earn a nun’s habit before war is on their doorstep.

Even a warrior like Nona cannot hope to turn the tide of war.
The shiphearts offer strength that she might use to protect those she loves, but it’s a power that corrupts. A final battle is coming in which she will be torn between friends, unable to save them all. A battle in which her own demons will try to unmake her.

A battle in which hearts will be broken, lovers lost, thrones burned.

“A million words won’t push the ice back, not even the breadth of a finger. But one word will break a heart, two will mend it, and three will lay the highest low.”

Holy Sister is the epic finale to the Book Of Ancestors trilogy. Well, this series from the start didn’t work out for me but I still had high expectations for this finale. Sadly, I didn’t enjoy it as much as I hoped. Lawrence’s writing just doesn’t really work for me the way it seems to for others. The plot in the first half was switched between the past and present which really confused me. Some characters were killed/died off page. The plot dragged in some places and action scenes were not enough. Overall, it ended up as an okay-ish read for me.  Yes, I realise I’m definitely in the minority here, but I expected more from this book.

The story picks up from where it was left off in Grey sister. The plot was shifted between past and present with three years gap. In the past, Nona and Zole is on a quest where they travel across ice carrying a Shipheart while being chased by their enemies. In the present part, Nona continues her studies in Sweet Mercy to finally become a full sister. Meanwhile the durns and the scithrow are on their way to acquire the ancient relics known as shiphearts which could open the mysterious ARK and give control over the moon. The emperors army and sweet Mercy nuns are preparing for the ultimate battle even though the odds are against them.

As this was a finale, I kinda expected there’s going to be an epic showdown between Noi-Guin and Nona. In the entire book, we had only one fight which was a little disappointing. I would love to see a fight between The Singular and Nona. He was so creepy and dangerous. There’s lots of training, chasing, running, hiding, and rescuing. There’s an epic battle at the end(most of it was off page) but Sister Pan was the only one who stole the spotlight. She was amazing! I really missed Absess Glass in this book. She was the mastermind behind everything. This series had two villains Queen Adoma of Scithrowl, and the Emperor’s sister Sherzal. I really wish we also got the villains perspective in this book. The author never gave much focus to the villains. I would’ve definitely enjoyed this book a little more if it was told from multiple perspectives.

To be honest, It was a well written plot but the pacing was too slow for my taste. It’s the same issue I had with the previous installments. The author wanted to slowly build the suspense but it never worked out for me. I found some scenes dragged. I didn’t enjoy the Escape parts where Nona and Zole travel together with a shipheart. It was interesting at the beginning, but later I found the whole travelling boring. There’re a lot of deaths in this book. I wasn’t emotionally connected with the secondary characters so I didn’t cared when some of them died.

Well, coming to the things I love about this book. Nona was pretty amazing, as always! Her growth from a child to a strong woman is the central focus of this entire series. I admired her strength and determination in this book. Despite the lack of her shadow weaving power and the absence of her demonic friend Keot, she stood strong and fought till the end. Friendship is another great aspect of this series. While the friendship part was overwhelming, the sudden romance  was underwhelming. I don’t think it was necessary. There are so many secondary characters but I only liked Nona’s friends Ara Jotsis, Juli, and Ruli. I didn’t enjoy Zole’s character as much as in the previous books.  I really liked the part Markus played in this book but I’m not sure about Regol. I didn’t care about his short fling with Nona. It was awkward and seemed forced. The world building was fascinating. The concept of the Ark and controlling the moon part was intriguing.

Overall, I think this was a good enough conclusion to the series even though it didn’t meet my expectations. I appreciate the author for the recap of the previous book at the beginning. I would’ve been totally lost without it. I wish all the authors do the recap thing in their books.

Although this series didn’t work out for me, I still highly recommend it to everyone who loves epic fantasy reads with a strong heroine, great friendship, magic, and kickass action.