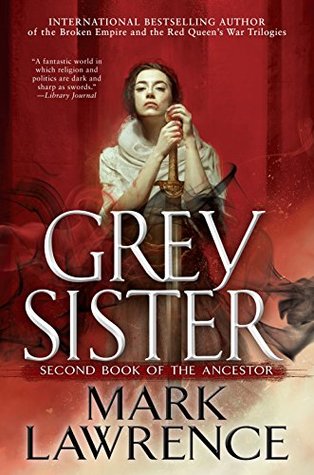 In Mystic Class Nona Grey begins to learn the secrets of the universe. But so often even the deepest truths just make our choices harder. Before she leaves the Convent of Sweet Mercy Nona must choose her path and take the red of a Martial Sister, the grey of a Sister of Discretion, the blue of a Mystic Sister or the simple black of a Bride of the Ancestor and a life of prayer and service.

All that stands between her and these choices are the pride of a thwarted assassin, the ambition of a would-be empress wielding the Inquisition like a blade, and the vengeance of the empire’s richest lord.

As the world narrows around her, and her enemies attack her through the system she has sworn to, Nona must find her own path despite the competing pull of friendship, revenge, ambition, and loyalty.

And in all this only one thing is certain.
.
There will be blood.

“There is a purity in rage. It will burn out sorrow. For a time. It will burn out fear. Even cruelty and hatred will seek shelter, rage wants none of them, only to destroy. Rage is the gift our nature gives to us, shaped by untold years. Why discard it?”

I tried so hard to love this book but it seems like we weren’t meant for each other. I had mixed feelings about the first book Red sister, but I really hoped that I would enjoy the second book. I was kinda in book slump when I picked this up and it was a big mistake because this had a slow start which did nothing but worsen my situation. It usually takes two or three days for me to finish a book and this one took two weeks. Nothing exciting happened in the first half of the book and I was really bored. Honestly, the characters were the only thing that made me continue this book till the end.

The story picks up two years after the end of the Red Sister where Nona Grey killed Raymel Tascis, son of Lord Thuran Tacsis. After escaping from a Noi Guin assassin’s attack, Nona is back at the sweet Mercy training hard to pass Mystic Class, but it’s not easy when she often gets bullied by her nemesis Joeli Namsis. Nona can easily kill her, but she didn’t want everyone to find out that she’s been harboring a demon inside her. Before she leaves the Convent of Sweet Mercy, Nona must choose her path and take the red of a Martial Sister, the grey of a Sister of Discretion, the blue of a Mystic Sister or the simple black of a Bride of the Ancestor and a life of prayer and service, but there are so many enemies who stands in her way, and she must defeat every one of them if she wants to make it to the end without getting killed.

I enjoyed the character development of Nona Grey. She’s not the same Nona Grey we’ve met in the first book. She’s fierce, strong and even more powerful. After the events in the first book, she’s black eyed and a shadow less novice. It was discovered that she’s the guardian of the chosen one, and possesses Hunska, Marjal, and Quantal skills which is a rare occurence. She’s harboring a bloodthirsty demon who tempts the dark side of her and she tries hard to control it. Besides Nona Grey, the side characters Zole, Sister Kettle, and Abbess Glass also played a major role in this book. Zole, Ice Tribe Princess and also the Chosen One is a powerful mystic. She’s totally a badasss character. I liked how Zole and Nona became friends despite their differences. Sister Kettle was pretty amazing. She wants to take the path of holy sister and doesn’t like killing, but she does surprise us in this book. Abbess Glass is a major highlight of this book. She’ s wise, smart, and a mastermind. I didn’t pay much attention to her character in the first book, but I really loved her  in this book. Finally, coming to my favorite character Keot. I enjoyed his character a lot. I absolutely loved him even though he’s a bloodthirsty demon. I hope we get to meet him once again.

I’ve mixed feelings about the plot. It was a great plot, but It was too slow for my taste and I struggled with the first half . I’m glad the pace picked up some speed in the second half because I was quite bored with the training sessions and I wanted some adventure and action. This book has a lot of four stars and five stars and I’m one of the anomaly who didn’t loved it. So it’s really a case of it’s not you, it’s me. The first book has a strong female friendship, but in this book I found it a little bit lacking. The writing was good, but it’s not my favorite. The book was told in multiple third person POV. The world building was complex and a little bit confusing to me. I wish the author provided more info on this world or a map and there’s are a lot of questions still left unanswered like the origins of the ancestors. The magical system was pretty amazing and unique, it’s one of the best aspects of this series.

Overall, It was an okay-ish read for me, but I really loved the characters and the action. So will I read the next book when it comes out? Yes, I would definitely read it! Even though it isn’t my favorite series, I still can’t wait for the final showdown.

I highly recommend this series to everyone who loves High fantasy filled with action, magic, and political intrigue.