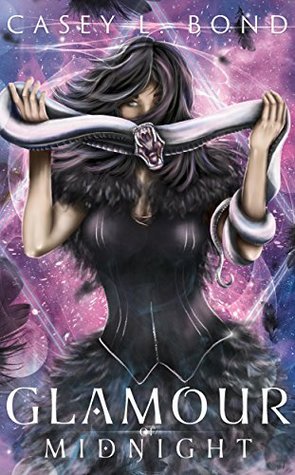 Nineteen-year-old Karis has been blind since birth, but for some reason, she can see through the wall of smoke that separates the human lands from those of the Faeries that rule in grand courts on the other side. Most of the time, the only thing she can see on the other side of the wall is the swipe of a tail or the trailing of a bony hand along the surface. But one day, a handsome faerie appears and sweeps her away into his world—a world that is being ravaged by an evil so dark and deadly, she fears she may never see her home again.

Loftin is a bounty hunter and he has been searching for Karis since she went missing from the Court of Ash. He needs to return her and collect the ransom. But the longer they travel together and the more he teaches her about what she is now able to see, the more difficult he finds the thought of letting her go. A fiery passion ignites between them, but with a monster tracking their every move, they must find a way to reach the Court of Ash before it kills them both.

This book is a unique mash-up retelling of Snow White and The Huntsman, and ACOTAR.  I’m actually not a fan of Snow White retellings but I couldn’t resist the fae folk. Glamour of Midnight turns out to be an entertaining read filled with magic and a dash of romance. It’s a dark faery tale retelling set in the world of Fae. Although I didn’t totally fall in love with it, I thoroughly enjoyed reading it. The story was well written and the characters Karis and Loftin were pretty good. The faery world that the author created was pretty interesting. This was the first book I’ve read by the author and I might check out her other works too.

Nineteen Year old Karis has been blind since she was born but somehow she can see the fog surrounding the fae land. Due to her strange appearance, she was treated like a monster in her village. She was called Changeling and monster by the people in Ironton. She’s found wandered in the woods when she was a kid and got adopted by a family. Because of her blindness she always depended on her adoptive brothers especially the older brother Iric.  When she was given gift of sight, she can can clearly see the magical barrier surrounding the fog and also the monsters lurking behind the wall. When her brother goes missing in the fae land, she goes after him to bring him back. Then her paths cross with a handsome fae. Loftin is a bounty hunter who was ordered by the evil  queen Nemain to hunt down Karis and return her to the Court of Ash. Many hunters failed in finding her but Loftin had no choice even though his chances are nill. Luckily, he finds Karis in the fae land and tells her that he’ll help find her brother and also protect her from the monsters, but she didn’t know that he was luring her to the evil queen who wants to kill her. During the journey, when Loftin gets to know more about Karis, he feels guilty about deceiving her. When feelings ignite between them, it becomes even more hard for him to let her go, but he couldn’t abandon his mission with so much at stake.

Karis is a innocent, sweet, and a compassionate character just like snow white. She deeply cares for her adoptive brothers and feels quite guilty that she’s a burden to Iric. She was like an outcast in her village. Even though everyone was rude to her she never felt angry with them. She has a fearless heart and will do anything to save her loved ones. I loved the sibling bond between her and her brothers. She has a nice character development. During the journey, she grows into a strong and courageous woman. I loved Loftin. He’s witty and totally charming but behind that face he hides his sadness and all his emotional turmoil.  He doesn’t know much about humans until he meets Karis. At the beginning, he thinks that she was deceiving him with her innocent act but eventually learns that she was not faking and it makes him even more guilty about deceiving her but he don’t have any another choice. I enjoyed the forbidden romance between Karis and Iric. I’m glad it wasn’t an insta-love, they’re one of my major book turn-off’s. The secondary characters seemed interesting, but sadly they aren’t fleshed out well enough.

The plot was interesting, and engaging enough to enjoy. Some parts were quite predictable but not everything. The concept was very unique. The story moved in a fast pace filled with adventure, magic, romance, and some handsome fae. The twists were unpredictable but the final fight with the queen felt pretty rushed to me. The true love’s kiss at the end seemed a little bit cliched to me, I wish the author come up with something different. Anyway, the writing was good and I quite enjoyed the dual POV. I liked the magical aspect in this book and also the interesting world the author has built. I really wanted to explore more of this world, but sadly it’s a stand-alone novel. I’d love to see more magical creatures, explore the other faerie courts, and also to meet some more handsome fae.

Overall, I enjoyed this book! It’s not my favorite fae novel but still it was a good retelling and I had fun reading it. If  you’re looking for a dark Snow White retelling then definitely give this a shot.

I recommend this book to everyone who loves dark fairy-tale retellings. It’s a stand-alone novel so you don’t need to wait for a sequel.

23 thoughts on “Glamour of Midnight By Casey L. Bond [Review]”