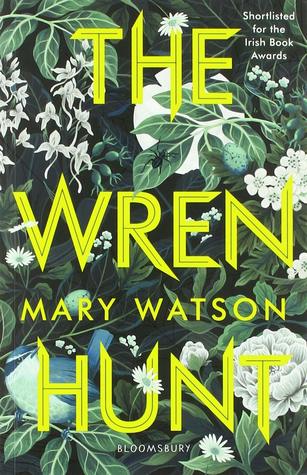 Every winter, Wren Silke is chased through the forest in a warped version of a childhood game. The boys who haunt her are judges, powerful and frightening pursuers, who know nothing of her true identity. If they knew she was an augur, their sworn enemy, the game would turn deadly.

But Wren is on the hunt, too. Sent undercover as an intern to the Harkness Foundation – enemy headquarters – her family’s survival rests on finding a secret meant to stay hidden. As the enmity between two ancient magics reaches breaking point, Wren is torn between old loyalties and new lies. And trapped in the most dangerous game of her life.

The Wren Hunt was an instant cover buy for me, and surprisingly, I really liked it. I quite enjoyed the lore in this book. The characters were good but not memorable enough. I loved the magical elements and how everything was set in the modern world. The story was based on an Irish Mythology that I’ve never read before. It’s actually not a fae novel, it’s something different and unique.

The story follows Wren Silke who’s been chased through the woods every year as part of a warped Game. The Judges boys who chases her don’t know about her real identity. She’s an augur, their enemy who’s been hiding among humans. Fed up with their games, Wren decides to bring down the Judges from the inside by joining as an intern in Harkness Foundation, the enemy’s headquarters. When Wren discovers all the secrets and lies, she doesn’t whom to trust, but her decision will change the fate of her family.

I liked Wren’s character! She’s a naive teenager who was grown up hating the Judges. Her character felt realistic. She has a unique power to read things in patterns and predict the future. I also enjoyed Tarc’s character, he’s one of the judges and David’s cousin. At first, he was wary of Wren but once he get to know her, he quickly warms up to her. The relationship between Wren and Larc was like Star-crossed lovers. I enjoyed their brief interactions and how it developed into something more. David’s character was a mystery. I’m a bit confused about his hatred towards Wren. He often bullies her but also fears her. Thankfully we get all our answers in the second book. I also liked Callista, the leader of Harkness Foundation. She’s a mysterious character who harbored many secrets.

I loved the concept and the plot, but the pacing was a bit slow for my taste. It’s the only issue I had with this book. I enjoyed the dark atmosphere and folk tale vibes. As secrets slowly unravels, and the plot progresses, it was easy to predict some of the major twists, but it still kept my interest till the end. I loved the lyrical writing style. The  Kilshamble setting was nicely done. The author perfectly incorporated the Irish mythology into the modern world.

Overall, I enjoyed this book. It wasn’t a total perfection, but it was a good read. There’s no cliffhanger at the end but it will leave you with some questions.

I would definitely recommend this book to people who loves YA books inspired by Irish Mythology and set in a modern world.