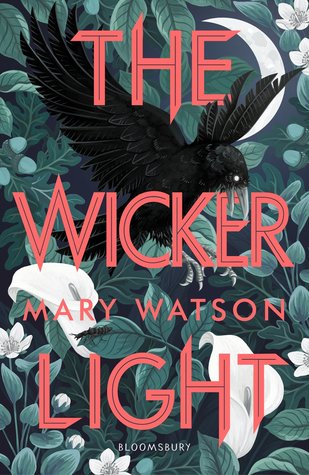 Zara’s family moved to Kilshamble for a new beginning. But everything changed the night her sister was found dead on the village green.

Two months later, Laila’s death is a riddle that nobody wants solved. Where were her injuries? Why was she so obsessed with local folklore? And what does all this have to do with David, the boy who lives at the big house?

As Zara delves deeper into her sister’s secret life, she becomes entangled in an ancient magical feud. All too unwittingly she is treading the same dangerous path that led Laila to the village green.

The Wicker Light is the second book in the Wren Hunt Duology. The second book follows David, from the first book and a new character named Zara. I picked this up as soon as I’m finished with the Wren Hunt because It’s David’s book, and I wanted to know more about this bad boy. I’m glad that I’ve read it, but I can’t say that I enjoyed it as much as the first book. While I enjoyed David’s character, I can’t say the same for Zara. She wasn’t as good as Wren. I really missed her in this book.

Zara and her family moved to Kilshamble for a new beginning but everything falls apart, when her sister Laila was found dead in the village green due to drug overdose. Her death was a riddle and no one seems to have answers for it. When Zara discovers her sister’s strange fascination with the local folklore, and how it was connected with her death, she sets out to find the answers and her first clue was David, the guy Laila frequently visited. During her investigation, she gets tangled in the war between Augurs and Judges. If she wasn’t careful, she’ll end up with the same fate as her sister’s.

I’ve mixed feelings about Zara! I found her character little annoying and too naïve. I was frustrated with some of her stupid decisions in the second half. I loved David’s character. He’s a complex guy who’s fighting his own demons. He wants to prove to his jerk of a father who always saw him as a disappointment. We finally get his backstory when he was very young and the reason behind his hatred towards Wren. He was kinda lonely guy but everything changes when he meets Zara. He’s intrigued by her, but he can’t bring her into his life. He’s determined to keep her out of their world, but the stubborn Zara keeps coming back. The romance between Zara and David was sweet, but honestly I didn’t feel any sparks in their relationship. I really missed Wren and Tarc in this book! They didn’t get much page time especially Wren. She’s barely there in the plot. They’re more like cameo characters.

The plot was a mix of murder mystery, myth, magic, and forbidden romance. As expected, there’s lots of lies, secrets, and betrayals. This book was a bit more darker than the first book. The riddles were interesting, but sadly the story didn’t captivate me enough. It’s not that bad, I just felt something missing. The writing was pretty good though. I enjoyed David’s perspective more than Zara’s. As usual, loved the creepy atmosphere and the woodsy kilshamble setting. We get more info on the lore and the magical elements but some parts still left me confused.

Overall, it was an okay-ish read for me! Even though it’s not my favorite read, I’m glad the author wrote David’s story. I really loved his character development. It’s honestly the best part in this book!

I would definitely recommend this book if you’re looking for YA books with Irish Mythology. It can be read as a stand-alone, if you don’t plan to read Wren’s story because it has spoilers from the first book.