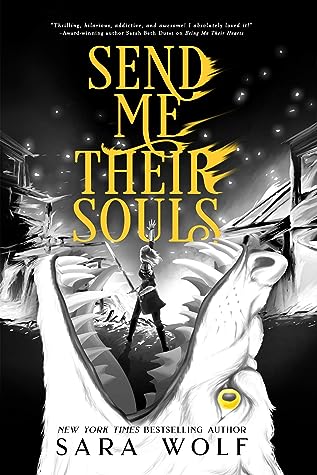 The finale to the epic Bring Me Their Hearts series reaches its thrilling conclusion, full of intrigue, emotion, and of course romance.

Reunited with Lucien, Malachite, and Fione, Zera finally has the choice of whether or not to regain her humanity and give up her life as a Heartless. But with war raging and an army of valkerax on the loose, she’s never needed immortality more. Will they be able to stop Varia without sacrificing themselves in the process?

Send Me Their Souls is the final book in the Bring Me Their Hearts Trilogy. So far, I’ve been a great fan of this series especially the snarky main character Zera. I had high expectations for this book but it turned out to be a let down. I didn’t enjoy it as much as I thought I would. There was way too many slow scenes and It really dragged in the middle.

The story continues where it was left off in the previous installment. Lucien’s sister Varia finally made her connection with the Bone tree and she’s building her own Valkerax army to crush her enemies to bring a new era where witches can have a free reign. Zera is finally free from Varia’s clutches, and her new master is Lucien who’s ready to give her heart back. With the upcoming war, Zera isn’t sure that it’s the right time to lose her immortality. Being human will make her vulnerable and a liability to the team. She wants to help saving the world to make up for her past mistakes.

Zera is my favorite character in the entire series because I love snarky heroines. She was supposed to be full of wit and confidence which was somewhat missing in this book. She’s ready to become a martyr to save her friends and they don’t even treat her right. I know she broke their trust, but still they don’t have to be rude. After everything they’ve been through, I just can’t deal with it. Lucien is a precious sweet cinnamon roll! He cares for his kingdom and his people very much. While everyone’s ready to throw Zera’s life away for a good cause, he’s the only one that disagreed with it because he not only cares for her but he also don’t want to risk someone’s life for his gain. Malachite is a great friend and a protective guard. I always enjoyed his character. I’ve mixed feelings about him but I don’t hate him. I didn’t like Fione in this book. She’s definitely my least favorite character.

The storyline was good, but It was quite slow in developing. There’s so many slow scenes which focused on Friendship bonding, character development, romance, and lots of travelling but not much action which is a bit disappointing. I honestly expected this to be an action packed finale. It’s pretty much a slow read, but things do get intense and kickass at the end. I loved the writing style. I can never get enough of it. The world building was nicely done. I’m glad that we get to visit new places in this magical world. I loved the concept of the bone tree, and the magical creatures named Valkerax.

Overall, I liked it but it’s not my favorite in the series. I’m glad the story concluded with a satisfying ending. I’m honestly not ready to say goodbye to this series! I can’t believe it’s finally over! I’m really gonna miss Zera!

I highly recommend this series if you like YA fantasy and snarky heroines!