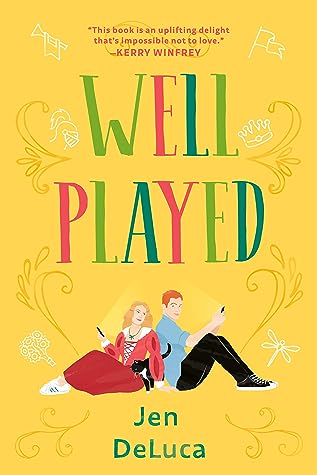 Stacey is jolted when her friends Simon and Emily get engaged. She knew she was putting her life on hold when she stayed in Willow Creek to care for her sick mother, but it’s been years now, and even though Stacey loves spending her summers pouring drinks and flirting with patrons at the local Renaissance Faire, she wants more out of life. Stacey vows to have her life figured out by the time her friends get hitched at Faire next summer. Maybe she’ll even find The One.

When Stacey imagined “The One,” it never occurred to her that her summertime Faire fling, Dex MacLean, might fit the bill. While Dex is easy on the eyes onstage with his band The Dueling Kilts, Stacey has never felt an emotional connection with him. So when she receives a tender email from the typically monosyllabic hunk, she’s not sure what to make of it.

Faire returns to Willow Creek, and Stacey comes face-to-face with the man with whom she’s exchanged hundreds of online messages over the past nine months. To Stacey’s shock, it isn’t Dex—she’s been falling in love with a man she barely knows.

Well Played is the second book in the Well Met standalone series. The story follows Stacey who’s the side character in the first book. It’s good to be back in Renaissance faire. I really enjoyed Well Played but not as much as Well Met. The characters were adorable and I’m always a great fan of books that has cute romance.

Stacey is the tavern Wench in Renaissance faire. The Faire is nearly coming to an end and she’s afraid to get back to her real world. She don’t know what to do with her life.  Stacey has big dreams of leaving her small town and study in New York. She wanted to become a fashion designer. When her mother suddenly falls ill, she feels that she can’t leave them behind. She couldn’t get over Dex, one of the brothers in the Dueling kilts band. During her drunken stupor, she sends a message to Dex via the bands facebook page. She panics after realizing her mistake. She’s surprised when she gets a reply from him. They both start to have conversations and Stacey feels something different about the polite messages which doesn’t match with Dex’s carefree personality. For nine months, they’ve exchanged online messages and when it’s time for Faire to return to Willow Creek, Stacey is excited to meet him and when the time finally comes, she’s surprised to find another guy.

I really liked Stacey! She’s a relatable character who’s going through so much in her life. The pressure of societal expectations, of being standing still while everyone is moving forward on their life. The love interest was pretty easy to predict. It wasn’t that hard but I do liked him even though his method of approaching her was wrong. I really hated Dax! He was such a douche. If the author ever decides to write his story, I will definitely skip it. The romance between Stacey and the mystery guy was pretty sweet. I enjoyed their online conversations but it would’ve been great if there was more banters. Their chemistry was lacking a little bit. It’s not as good as Emily and Simon’s.

Plot wise, it was a good read. The story starts at the end of Renaissance faire and people are planning for Emily and Simon’s wedding. It’s good to see my favorite couple getting their HEA. It was both cute and emotional read. The pacing was good and enjoyed the author’s writing style. I really loved the Renaissance faire setting. Emily has brought some new changes to the faire and Simon is trying to adapt with the changes.

Overall, it was a fun read filled with family, friendship, and romance! Even though it wasn’t my favorite, I can definitely say that people will enjoy reading Stacey’s story. The next book Well Matched is about April and Mitch, and I’m super excited for it.

I would highly recommend this book to the people who loves cute romance!