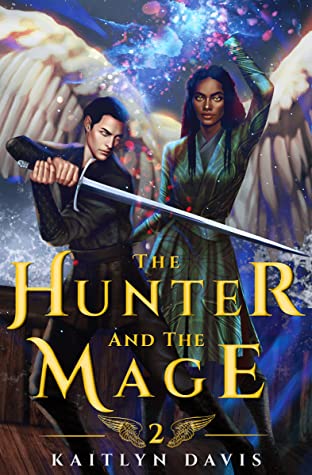 A mage written in prophecy…

When Lyana wakes in the Sea of Mist, adventure is the first thing on her mind. But between her unruly new magic and an unyielding young king, the world below comes with more responsibility than she ever dreamed. An entire civilization exists within the fog, and its survival depends entirely on her.

A hunter forged in blood…

Adrift at sea on a ship full of strangers, Rafe fights to cope with his new reality. He’ll do anything to return to the sky and the people he left behind. When a surprising offer comes his way, he instantly accepts, sparing no time to consider the consequences.

Loyalties are tested and an ancient war begins anew…

With rebellion in her heart, Cassi defies her king and befriends the prince she’s been ordered to kill. Oblivious to the threat, Xander welcomes her into his inner circle, determined to rescue his mate. As one works to help and the other to hinder, an ancient enemy stirs, forcing Cassi to choose between trusting the man who broke her heart and turning her back on everything she’s ever known.

The Hunter And The Mage is the second installment in the Raven And The Dove series. The story of our star crossed lovers continues in this exciting sequel filled with twists, magic, dragons, and romance. The first book was kinda ended up with a huge cliffhanger and I couldn’t wait to jump into this as soon as I got my hands on it. Although I had a little issue with the slow pacing, it was overall an enjoyable read especially Cassi and Xander’s parts, and now I’m dying for the next book. The following review might contain spoilers for the first book so be warned.

The story continues where it was left off in the first book. After getting kidnapped from her home, Lyana wakes up to find herself at a strange place surrounded by water and in front of a young king who believes that she’s his destined queen who’s prophesied to save the world. Lyana agrees to help him and she trains with him to control her gifted power which was seen as an abomination in her home. Meanwhile Rafe is surrounded by strangers on a ship and he needs to get acquainted with his new reality where he can’t fly and go back to his world. When he gets a surprising offer to regain his wings, he instantly accepts without thinking about the consequences. On above, Cassi defies her king and befriends her target named Xander who finds her fascinating. When she’s forced to make a tough decision, Cassi is torn between her new friend and an old friend who broke her heart.

This book follows five characters Lyana, Rafe, Malek, Cassi, and Xander. Except for Malek, I adored all the characters in this book but my favorite would be Cassi and Xander. The relationship between them was forbidden and sweet. I loved Cassi! I found her character more interesting than Lyana’s. She was a total kickass! Lyana is a selfless person, but she’s too naïve when it comes to trusting people. Xander is a precious Cinnamon who must be protected at all cost. I’m glad we got more of his perspective in this book. I enjoyed the new Rafe who’s vulnerable. Without his wings, he’s not the same warrior who can’t be defeated. I honestly liked the new Rafe and his friendship with the ship crew mates, who’re pretty fun especially Brighty. She’s an interesting character and I really wait to know more about her.

The plot was interesting, but the first half was slow paced which Is the only issue I had with this book. The second half was pretty good though. I enjoyed the slow burn between Xander and Cassi more than the triangle between Rafe, Lyana, and Malek. When things started to make sense, it was easy to predict that major twist and I wasn’t wrong. The last part was pretty intense when a new enemy surfaces wreaking havoc in the skies. It was a surprising twist and I’m excited to know what happens next. The author’s writing was engaging. The book was written in multiple POV’s. The world of Sky Isles was pretty amazing with all those floating islands but I didn’t find anything extra ordinary about the Kingdom beneath. Except for the dragon part, It was a typical medieval setting.

Overall, this was a good sequel! The book concludes with some interesting twists that left me desperate for the third book.

I would definitely recommend this book if you’re into YA fantasy filled with magic, adventure,  and forbidden romance.