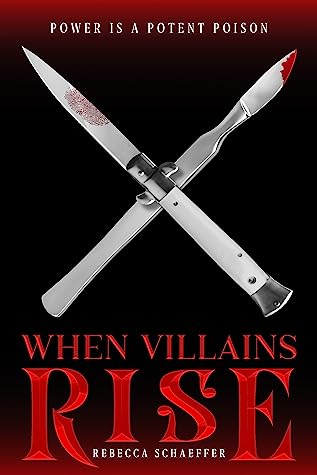 Dexter meets Victoria Schwab in this dark and compelling fantasy about a girl who is determined to take down the black market once and for all in the conclusion to the trilogy that started with the critically acclaimed Not Even Bones.

Nita finally has Fabricio, the boy who betrayed her to the black market, within her grasp. But when proof that Kovit’s a zannie—a monster who eats pain in order to survive—is leaked to the world, Nita must reevalute her plans.

With enemies closing in on all sides, the only way out is for Nita and Kovit to take on the most dangerous man in the world: Fabricio’s father. He protects the secrets of the monsters who run the black market. Stealing those secrets could be the one thing that stands between Nita and Kovit and certain death in the thrilling conclusion to the trilogy that began with the critically acclaimed Not Even Bones.

When Villains Rise is the final installment in the Market Of Monsters trilogy and I think It was a satisfying conclusion to the series even though some parts felt dragged out. The author finally describes the main characters backstories in depth. We get surprising twist in the development of relationships, and honestly it left me a little bit disappointed. After the events in the second book, I was expecting more. Nonetheless, it was still an enjoyable read and I’ll definitely look forward to more books by the author.

After Kovit’s identity as a Zannie is revealed to the whole world, Nita’s only option is to take out Fabricio’s father, the dangerous guy who protects the secrets of the monsters and also runs the black market. They both kidnap Fabricio and tortures him enough so that he would reveal information on his father’s company. When they all finally come to an understanding, they plan to steal the information by infiltrating the enemies den, but it wasn’t an easy task and they could get killed. With time running out, they have to make a final decision.

Nita seemed more psychopathic, and merciless than the previous installments. She’s not cruel, but when it comes to saving Kovit, she’ll do anything. On the other hand, Kovit hates torturing others but sadly it’s his only way of survival. My heart melted when he reunited with his older sister who’s a INHUP officer. Nita and Kovit are complex and morally gray. I’m glad that we finally get their backstories especially Kovit’s. They both have a strong bond, and I was surprised with the new turn in their relationship. I didn’t see that coming. It’s a spoiler so I’m not going to say more about it. Coming to the secondary characters, I really liked Adair, Diana, and also Fabricio.

The plot was interesting but it felt dragged on so many places. The pacing seemed a bit uneven. Being the final book in the series, I expected it to be non-stop action packed. The twists were pretty good though. The author’s writing was addicting. The setting was good, but I wish we got more from the INHUP side.

Overall, it was a good ending to the trilogy. Everything wrapped up nicely in the end and I’m glad it didn’t conclude with a tragedy. I hope the author writes more books with Villain-ish characters in the future.

I would definitely recommend this series if you’re into dark, psychopathic, and villain-ish characters, and doesn’t mind blood, torture, and gore.