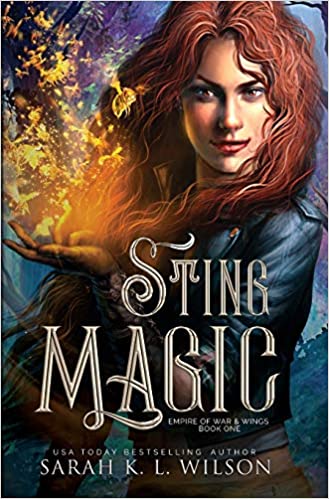 She has the wrong kind of magic but the right kind of heart.

In the Winged Empire, magic comes on swift wings.

It manifests from its bearers as a bird, granting its skills to those who wield it.

But this year, things are different.

Aella is the fiercely determined daughter of settlers on the far edge of the Winged Empire. Her huge family means everything to her and when the Empire strips them of their weapons, leaving them defenseless against the deadly magic that surrounds their settlement, she feels powerless to help.

Unfortunately, her frustration comes out in the worst way possible – as aberrant magic.

When Aella’s magic manifests, it doesn’t come as a bird. It comes as an angry swarm of bees.

And that aberration will threaten her life and everything she loves.

Can Aella keep her family safe by learning to control a magic born of frustration and fear before it masters her instead?

Sting Magic is the first book in the Sarah K.L. Wilson’s new series Empire Of War and Wings. I’ve been looking forward to this series since I’ve finished her previous work The Tangled Fae. The magic in this book was very unique. Despite having issues with the pace, I really enjoyed the characters. This book felt more like an intro and I hope we get more answers in the next book.

The story follows seventeen year old Aella who’s living with her huge family somewhere far away from the Winged Empire. Her life turns upside down, when her house is suddenly ambushed by the royalty who later seizes their weapons which are the only things that helps them to protect against the forbidding that’s slowly invading their land. Aella wants to stand up against the Le Majest, but she don’t want to risk the lives of her family members. Every year their kingdom celebrates Hatching where people aged between twelve and Nineteen are tested for magic. On the day of hatching, Aella attends the event but this time the royalty are also in attendance. When Aella hatches an abomination everyone is surprised. Instead of a bird, she hatches a swarm of bees. Soon she was swept away from her home to travel along with a cruel prince and his mysterious guardian.

I really loved Aella! She’s fierce, brave, stubborn, and a little bit impulsive. She’s very protective of her family and never gives up even if the odds were against her. I enjoyed her character even though she was very stubborn. Le Juste Montpetit is ruthless and totally insane. I found his character very interesting even though he’s the bad guy. Guardian Osprey was intriguing and fun. He seems to have some hidden agendas and he wants Aella to join him in his grand scheme. I really want to know his backstory. From the secondary characters, I liked Wing Ivo and Zayana. Ivo was a freaking cool character. Unlike other Wings, he’s not afraid to go against Juste’s commands. Zayana is a young hatchling. At the beginning, I didn’t like her because she was pretty rude, but she slowly warmed up to me.

The plot was interesting but it was easy to guess some parts. There isn’t any romance yet but after finishing this book, I think there’s going to be one in the sequel. Although the pace was a bit slow for my taste, the intriguing magic had kept my interest throughout. The whole book was written in Aella’s Pov. The writing style was good and the world building was nicely done. The magic system was very unique. I’ve never read a book with a bee magic and it was very refreshing. I hope there’s going to be more magic in the sequel.

Overall, I liked this book! It concludes with a twist and lots of questions. I’m definitely picking up the next book!

I would recommend this book if you’re looking for YA fantasy with a unique magic and a fierce heroine.