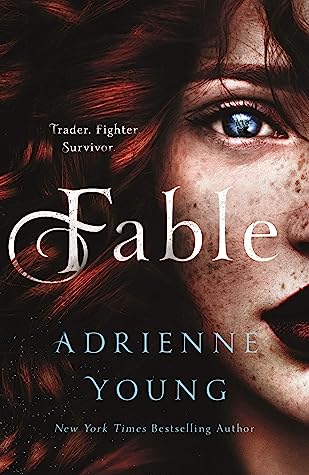 Welcome to a world made dangerous by the sea and by those who wish to profit from it. Where a young girl must find her place and her family while trying to survive in a world built for men.

As the daughter of the most powerful trader in the Narrows, the sea is the only home seventeen-year-old Fable has ever known. It’s been four years since the night she watched her mother drown during an unforgiving storm.

The next day her father abandoned her on a legendary island filled with thieves and little food. To survive she must keep to herself, learn to trust no one and rely on the unique skills her mother taught her. The only thing that keeps her going is the goal of getting off the island, finding her father and demanding her rightful place beside him and his crew. To do so Fable enlists the help of a young trader named West to get her off the island and across the Narrows to her father.
But her father’s rivalries and the dangers of his trading enterprise have only multiplied since she last saw him and Fable soon finds that West isn’t who he seems. Together, they will have to survive more than the treacherous storms that haunt the Narrows if they’re going to stay alive.

Fable is one of my highly anticipated books of 2020. After absolutely loving the author’s Sky In The Deep, and Warrior of the wild, I was really looking forward to this book. It has intriguing synopsis and I love books with sea adventure. So did it meet my expectations? Sadly, no. It was a good read with an interesting plot, but I wasn’t able to emotionally connect with the characters. Otherwise this would’ve been a solid five star read for me.

Fable was only fourteen years old when her father had left her on a legendary island filled with thieves and criminals. Being a daughter of the powerful trader, she can’t reveal her identity. She needs to survive on her own. Her father promised her that he would be waiting for her when she returns to him on her own. For three years, Fable has been surviving by being a dredger who’s skilled in diving into the underwater. She collects gems and other important stuff and sells them to the traders. When she collects enough money, Fable asks the help of a young trader named West to get her off the island and take her to Ceros where she would find her father and enlist herself in his crew. Despite their crews warnings, West decides to help her but Fable didn’t know that the crew of Marigold has been hiding many secrets.

Fable is a fierce heroine with strong determination and strength. She wouldn’t give up even when the odds were against her. I really enjoyed her character. She reminded me of Hannah from the Warrior of the Wild. She’s a well built character but the other characters weren’t fleshed out well enough. West is a character with cold and hot personality. He might’ve helped Fable but most of the time he ignored her.  The romance between them was okay-ish. I was a little disappointed that it wasn’t as intense as I thought it would be. Fable and West don’t have many interactions, but suddenly they’re kissing underwater and the whole scene really seemed awkward to me. There’s not much tension or angst between them. Except for the main characters, I honestly didn’t care much for the marigold crew. I wish there was more depth to their characters.

The plot was interesting, but I found the first half pretty slow. I enjoyed the adventure, and the treasure hunting parts. There are some unpredictable twists, but I should’ve seen them coming. They’re not too hard to guess. Fable and West have been trading for three years and it was all off page. I wish we had given a glimpse of their first meeting or maybe a novella. The book was written in Fable’s POV and I loved the author’s lyrical writing style.  The world building was amazing. I enjoyed the world of The Narrows especially The Island of Jeval. So far, the author explored Dern and Ceros and I can’t wait to know where the author takes us next.

Overall, it was a good read! Although it wasn’t anything extra-ordinary, I still had fun reading Fable’s journey. The book finally ends with a cliffhanger and I’m definitely picking up the next book when it comes out.

I would recommend this book if you’re into YA fantasy books that has sea adventure, and strong heroine.