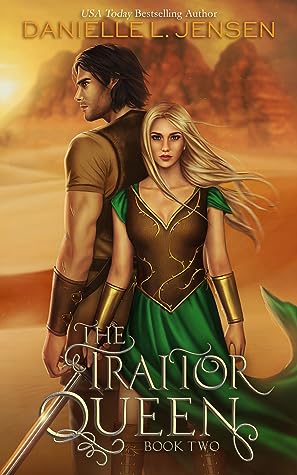 A queen now in exile as a traitor, Lara has watched Ithicana be conquered by her own father, helpless to do anything to stop the destruction. But when she learns her husband, Aren, has been captured in battle, Lara knows there is only one reason her father is keeping him alive: as bait for his traitorous daughter.

And it is bait she fully intends to take.
Risking her life to the Tempest Seas, Lara returns to Ithicana with a plan not only to free its king,

but for liberating the Bridge Kingdom from her father’s clutches using his own weapons: the sisters whose lives she spared. But not only is the palace inescapable, there are more players in the game than Lara ever realized, enemies and allies switching sides in the fight for crowns, kingdoms, and bridges. But her greatest adversary of all might be the very man she’s trying to free – the husband she betrayed.

With everything she loves in jeopardy, Lara must decide who – and what – she is fighting for: her kingdom, her husband, or herself.

The Traitor Queen was an exciting sequel to the Bridge Kingdom. It’s an NA fantasy romance that has action, adventure, political intrigue and romance.  The first book had kinda ended with a huge cliffhanger and I jumped into this book as soon as I got my hands on it. Well, I enjoyed it even more than the first book. It met all of my expectations. I enjoyed the characters, the romance, and the plot. The following review contains spoilers for the first book, If you haven’t read it yet then please stop right here.

The story continues after the events in the first book where Aren gets captured by Lara’s father. To save her husband, Lara decides to get help from Ithicana’s people even though she’s now exiled as the traitor queen. Her new plan is not only to save their king but also liberating the Bridge Kingdom from her father’s clutches. Lara’s father is suspicious about her double crossing him, so he keeps Aren alive as a bait for her. Lara knew that rescuing Aren from her father’s palace is not an easy job that she could do alone. She starts to search for her sisters who’re currently in hiding. Together they plan to fight against their tyrant father once and for all, but Lara’s greatest battle is with her own husband who can’t seem to forgive for her betrayal.

I absolutely enjoyed Lara’s character! She’s been through so much in this book. To make up for her mistakes, she tries very hard to help Ithicana’s people while bearing their wrath and insults. She doesn’t even hesitate to risk her life. Aren is a brave and a loyal king. After his captivity. He endures both physical and mental torture. When things becomes too much, he starts to lose his sanity. Lara’s father is one hell of a sadistic and cruel guy. I pretty much hated him! The romance between Lara and Aren is filled with lots of angst, anger, and intense feelings. Lara still loves him but Aren isn’t ready to forgive her. Even though I love these two, there’s one scene that I found a bit disturbing where Lara gets deeply hurt and Aren helps her bandaging the wound and the next thing you know, they’re jumping each others bones. It was very unrealistic because she just had stitches and it would hurt like hell. And also the guy leaves her in the morning without a note in the middle of nowhere. It was a pretty low thing to do. He was like let’s have one last $*#@ before I dump you. I seriously can’t forgive him for that.

The secondary characters were pretty good! I loved Lara’s sisters. They’re totally kickass. I enjoyed the witty banters between them. I also liked Lara’s scholar cousin. He’s fun and mysterious. It looks like he has some secret agenda and I’m really excited to read his story in the next book.

The plot was engaging! It begins with a slow start but don’t worry the pace picks up speed as the plot progresses. I’m glad this book has more action than the first book. Loved the way everyone teamed up together to fight against a tyrant king. The ending was pretty intense and action packed. I couldn’t put it down even for one sec. The writing was addicting and the switching pov’s between Lara and Aren has kept my interest throughout. The world building was pretty good. Even though there’s no magic in this world, I still loved the way author described every part of it. Can’t wait to explore more of it.

Overall, I loved this book! Even though I had few minor issues, it was a satisfying read. I’m so happy that there’s going to be more books in this series with new characters. I’ll definitely look forward to them!

I highly recommend this series if you’re into NA fantasy romance with enemies to lovers trope!

3 thoughts on “The Traitor Queen (The Bridge Kingdom #2) By Danielle L. Jensen [Review]”