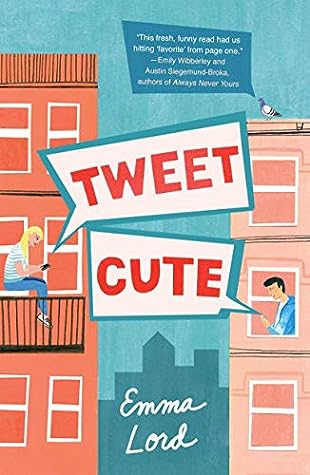 Meet Pepper, swim team captain, chronic overachiever, and all-around perfectionist. Her family may be falling apart, but their massive fast-food chain is booming―mainly thanks to Pepper, who is barely managing to juggle real life while secretly running Big League Burger’s massive Twitter account.

Enter Jack, class clown and constant thorn in Pepper’s side. When he isn’t trying to duck out of his obscenely popular twin’s shadow, he’s busy working in his family’s deli. His relationship with the business that holds his future might be love/hate, but when Big League Burger steals his grandma’s iconic grilled cheese recipe, he’ll do whatever it takes to take them down, one tweet at a time.

All’s fair in love and cheese―that is, until Pepper and Jack’s spat turns into a viral Twitter war. Little do they know, while they’re publicly duking it out with snarky memes and retweet battles, they’re also falling for each other in real life―on an anonymous chat app Jack built.

As their relationship deepens and their online shenanigans escalate―people on the internet are shipping them??―their battle gets more and more personal, until even these two rivals can’t ignore they were destined for the most unexpected, awkward, all-the-feels romance that neither of them expected.

Tweet cute is a fun YA contemporary novel filled with enemies to lovers romance, family relationships, and delicious food. I picked this up because I’ve heard great things about it and also because it has my favorite trope. I enjoyed the banters between the main leads. I wouldn’t say it was my favorite read, but I had fun reading the story.

Pepper is a smart and witty character. I really loved her sense of humor. I enjoyed the witty comebacks between her and Jack. Jack was a pretty fun guy. He loves annoying Pepper in school, but he wasn’t aware that she’s the enemy who he was having twitter war online. The romance between them was super cute especially their banters. The secondary characters were okay but I honestly didn’t pay much attention to them.

Besides romance, this book was also focused on heavy topics. There’s some family drama at the end. It was a bit clichéd, but I really hated Pepper’s mom. She was so annoying about controlling her daughter and I didn’t like the way she treated her like an employee. The twitter war between Pepper and Jack was fun even though it was a bit unrealistic. This book will leave you craving for baked goods. Pepper loves baking and her monster cake sounds delish. The author’s writing was pretty good and I liked the dual POV’s.

Overall, it was a fun read filled with family, friendship, food, and romance. The characters were cute and I really enjoyed the family dynamics.

I would recommend this book if you’re into YA contemporaries with cute enemies to lovers romance.