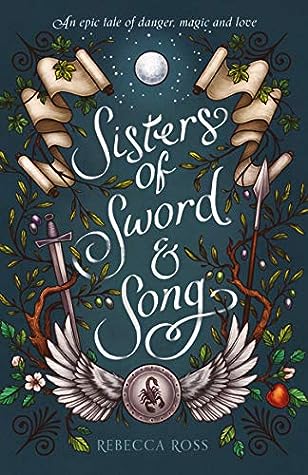 After eight years, Evadne will finally be reunited with her older sister, Halcyon, who has been serving in the queen’s army. But when Halcyon unexpectedly appears a day early, Eva knows something is wrong. Halcyon has charged with a heinous crime, and though her life is spared, she is sentenced to 15 years.

Suspicious of the charges, brought forth by Halcyon’s army commander, as well as the details of the crime, Eva volunteers to take part of her sister’s sentence. If there’s a way to absolve Halcyon, she’ll find it. But as the sisters begin their sentences, they quickly learn that there are fates worse than death.

“Failure is never final unless you choose it to be.”

Sisters of Sword and Song is a story filled with adventure, magic, mythology, and Sisterhood. I haven’t read Rebecca Ross’s Queen’s Rising so I don’t know what to expect from this book. Although I had few issues, for the most part It was an entertaining read and I’m glad that I gave it a shot.

Evadine was only nine years when her older sister Halcyon left them to serve the queen’s army. After eight years, Evadine is pretty much excited to finally meet her. When she arrives a day earlier hiding in her room, Evadine realizes something is wrong. When she reveals that she has done a heinous crime and that she’s currently on the run, Evadine helps her escape. When her sister finally gets caught by the authorities, she’s sentenced to Fifteen years. Eva is suspicious of her sentence and volunteers to take half of her sentence. Her search for answers eventually leads to a dangerous quest with the Commander’s youngest son.

Evadine is strong yet vulnerable character. She would do anything to protect her loved ones. She’s selfless, caring, and honest character. She always walks with a limp because of a dog bite when she was a child. She tries to conceal it because she doesn’t want everyone to assume her as weak and fragile. Halcyon is brave, confident, and smart. Both of them are complete opposite to each other. Nonetheless, I really enjoyed the sister bond between them. From the secondary characters I really liked Damon, Commander’s youngest son.  The slow burn romance between Evadine and Damon was pretty sweet. They’re both misfits in their family and I enjoyed how they bonded with each other slowly.

The plot was intriguing but It was a little slow at the start. The pacing was good, but It wasn’t an action packed read. Except for the adventure in the end, there’s not much action in this book. I really enjoyed the magical quests and the sisterhood between the two sisters. The writing was great. The book was told in dual POV’s switching between Evadine and Halcyon. The world building was superb. The kingdom of Corisande was intriguing. It is an alternate Ancient Greek world with its own unique mythology. There’re magical artifacts left by the nine gods that can give humans magical abilities. It’s too bad that this was only stand-alone read because I would love explore more of this world.

Overall, it was an enjoyable read! I didn’t know it was a stand-alone read.  Everything got wrapped up pretty nicely in the end.

I highly recommend this book to readers who’re looking for YA fantasy books with strong sisterhood.