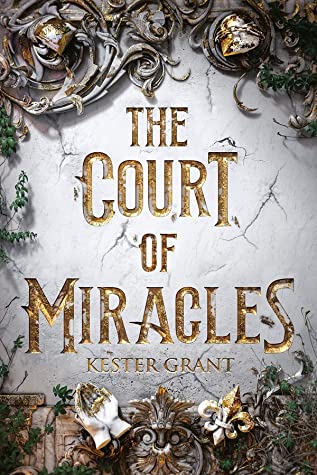 In the violent urban jungle of an alternate 1828 Paris, the French Revolution has failed and the city is divided between merciless royalty and nine underworld criminal guilds, known as the Court of Miracles. Eponine (Nina) Thénardier is a talented cat burglar and member of the Thieves Guild. Nina’s life is midnight robberies, avoiding her father’s fists, and watching over her naïve adopted sister, Cosette (Ettie). When Ettie attracts the eye of the Tiger–the ruthless lord of the Guild of Flesh–Nina is caught in a desperate race to keep the younger girl safe. Her vow takes her from the city’s dark underbelly to the glittering court of Louis XVII. And it also forces Nina to make a terrible choice–protect Ettie and set off a brutal war between the guilds, or forever lose her sister to the Tiger.

The Court of Miracles is a YA fantasy novel inspired by Les Misérables. I’ve never read the original tale but I know what it’s about and who’s going to survive in the end. This was actually my second Les Misérables retelling and the first one that I’ve read was Sky Without Stars by Jessica Brody which I didn’t love. The Court Of Miracles was a refreshing read with a unique plot. I enjoyed the complex world filled with corruption, violence, and danger. The main protagonist Eponine was just amazing. She’s actually my favorite Les Miserables character and I’m so glad that finally someone gave justice to her character.

After the failed French Revolution, the city of Paris is divided between royalty and nine criminal underground guilds: Guild of Chance, Beggars, Mercenaries, letters, smugglers, thieves, assassins, dreamers and flesh. All of these guilds form The Court of Miracles. All the wretched are equal before the Court of Law and each Lord or Lady of the Guild is their father/Mother and their word is the law to the Guild. Eponine (Nina) Thénardier is a talented cat burglar and member of the Thieves Guild. When her sister Cosette aka Ettie is sold to the ruthless Lord of the Guild of Flesh by her greedy father, Nina is determined to get her back even if it’s going against her guild but physically attacking a member of the another guild can set off a brutal war between the guilds. With the clock ticking away, Nina had to make a choice between her guild and her sister.

I loved Nina! She’s  smart, cunning, and a fierce character. She led a pretty tough life while facing abuse from her father. She’s a clever thief which earned her the name Black Cat. Her sister Ettie is totally different from her. She’s sweet, pretty, and caring. I admired Nina’s love for her sister. She would do anything to save her. Sadly, Ettie didn’t get much page time because she’s mostly in captivity. There’s no romance in this book, but there’s three possible love interests. We have St. Juste, The Dauphin, and Montparnasse. I honestly liked all of them. Our heroine doesn’t have any interest in them because her only focus was on saving her sister but these guys were pretty much enamored by her. I can’t wait to know who steals her heart in the next book. And last but not the least I also liked Guild of The Thieves Lord Tomasis who’s like a father to Nina.

It has an interesting plot that will keep you engaged till the end. The first half was a bit slower paced but the second half totally makes up for it. I really loved the guild’s concept and how everything was connected. There are some surprising twists and turns that are unpredictable. The book was written in Nina’s POV. The author’s writing was fabulous. The world building was amazing. It was one of the best aspects of the book. Everything was detailed and it was easy to get a clear picture.

Overall, this was a great read and an amazing debut! Thankfully, the book doesn’t end with any heavy cliffhanger, but I’m still pretty desperate for the next book. I can’t wait to know what the author has in store for us next.

I would recommend this book if you like YA historical fiction that has smart, and kickass heroines.