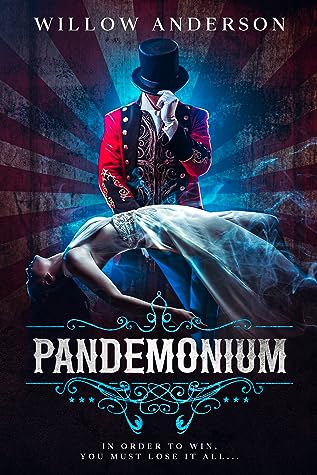 Lace Ashburn was only twelve years old when she witnessed a murder behind Pandemonium’s grandeur – a strange, magical traveling show where admittance is hard to gain. With a dead Ringmaster and his murderer in jail, Pandemonium packed up and fled in the middle of the night, remaining missing for five years.

When Lace’s older brother steps up to take the throne of Falhaven, he announces not only the return of Pandemonium but an arranged marriage for her with their neighboring country’s prince. With less than a week to discover a way to keep her freedom from her fiancé, Lace finds her way back into the heart of Pandemonium.

With a new Ringmaster heading Pandemonium, Lace is pulled into a competition run by the strange show with an invaluable prize at the end should she win. Paired together with a mysterious partner, Lace fights through the contest to keep not only her independence but her heart safe.

Come one, come all, to the show that will enthrall…welcome to Pandemonium where in order to win, you must lose it all.

Pandemonium is the first book in the series and also a good debut. I actually heard about this book from my bookstagram friends and after reading the blurb, I knew that I would enjoy it. It has the exact same vibes as Caraval. The story was filled with mystery and magic. Although the romance was a bit cliche, I still ended up loving it.

The story follows seventeen year old Lace Ashburn who’s a princess. To stop a war with a neighboring kingdom, her brother the soon to be king arranges her wedding with their heir. To celebrate her wedding, he announces the return of Pandemonium that has fled five years ago after the murder of their Ringmaster. Lace had witnessed the murder with her own eyes when she was twelve. While searching for her parents murderer, Lace finds her way back to the circus and enters into the new Ringmaster’s competition. Before she looses her freedom, Lace must win the competition with the help of her alluring partner.

I enjoyed Lace’s character in this book. She’s smart, strong, and determined. She never gave up even when the odds were against her. And next we have Killian. Lace’s mysterious and charming partner. He wasn’t interested in the prize money but he still enters the competition just to win. And last but not the least we have the seductive Ringmaster who has special interest for Lace. He’s very mysterious and very very intriguing. He’s a guy who harbors many secrets and you can’t help but want to know more about him. The triangle was predictable but man did I still enjoyed it. The secondary characters were also pretty good especially Lace’s fiance and his mother.

The plot was filled with mystery, danger, magic, and intrigue. The story captivated me from the start. The concept was unique but there are some aspects that are a bit similar to caraval which made some parts predictable. I honestly didn’t mind it much because it didn’t hinder my overall enjoyment. Some of the twists still left me shocked, and the ending was well done. For a debut, the writing was great. The book was told in Lace’s POV. I’m not sure what to say about the world building  because the book mostly focused on Pandemonium setting which was fabulous, and I also liked different types of Magic in it especially the Deck of Divination.

Overall, I loved this book! It was a delightful read filled with right amount of magic, mystery, and romance. As expected, the book ends with a shocking twist and I can’t wait to dive into the next book.

I highly recommend this book to the Caraval fans!