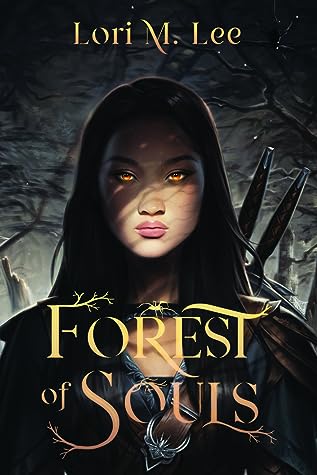 Sirscha Ashwyn comes from nothing, but she’s intent on becoming something. After years of training to become the queen’s next royal spy, her plans are derailed when shamans attack and kill her best friend Saengo.

And then Sirscha, somehow, restores Saengo to life.

Unveiled as the first soulguide in living memory, Sirscha is summoned to the domain of the Spider King. For centuries, he has used his influence over the Dead Wood—an ancient forest possessed by souls—to enforce peace between the kingdoms. Now, with the trees growing wild and untamed, only a soulguide can restrain them. As war looms, Sirscha must master her newly awakened abilities before the trees shatter the brittle peace, or worse, claim Saengo, the friend she would die for.

Forest of Souls is one of my highly anticipated reads of 2020. I loved the cover of this book which is of course another great work by Charlie Bowater. I haven’t read Lori’s previous work, but the synopsis of this book sounded very promising and cool. So did it meet my expectations? Sadly no, but it wasn’t a bad read. For the most part, I enjoyed the story but I had few issues with it. I loved the concept and the magical system though.

Sirscha Ashwynn has been training to be the queen’s royal spy who’re called as shadow. Her mentor is a powerful shadow. While sabotaging her rival apprentices task, she awakens her shaman powers and gets hunted by the ones she’s used to train with. In the hunt, her friend Saengo gets killed and she revives her by using her new powers. She was later rescued by the Prince and gets summoned to the spider king who resides in the mystical forest. Her only chance of survival is either facing death or meet the spider king. When she meets Rowan the spider king, she’s surprised to find that he needs her help in restraining trees that are possessed by souls. When Sirscha feels something is not right, she tries to find the answers even though she was warned not to.

Sirscha is pretty stubborn, impulsive, and a fierce heroine. I quite enjoyed her character even though some of her actions were reckless. Her friendship with Saengo did reminded me of Safi and Isuelt from the Truthwitch, but I couldn’t connect with their sisterbond. I wish there was more depth to Saengo’s character. She appeared only when the plot needed her. There’s also interesting side characters but some of them weren’t fleshed out well enough especially Prince Theyen and Prince Meilek. There isn’t any romance in this book but I’m pretty sure that there’s going to be one in the next book. I really enjoyed the banters between Theyen and Sirscha, and I can’t wait to know more about Prince Meilek. I also liked the spider king’s character. He’s mysterious and dark.

The plot was interesting but it has a slow start because the author wants us to get acquainted with the world and the characters first before jumping into action. The pace was good. The concept was amazing but some of the plot twists were predictable. I enjoyed the writing style of the author. The world building was nicely done. It has the dark grisha vibes. The magical system was complex yet interesting. It’s a bit confusing to understand at the beginning because there were so many things to remember. I might have flipped through the glossary a few times.

Overall, I enjoyed this book! It was dark, magical, and a thrilling read. The book ended with a major cliffhanger and I can’t wait for the next book.

I would recommend this book if you’re looking for a unique fantasy read but keep your expectations low.