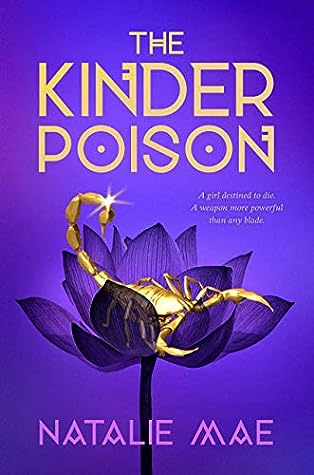 Zahru has long dreamed of leaving the kingdom of Orkena and having the kinds of adventures she’s only ever heard about in stories. But as a lowly Whisperer, her power to commune with animals means that her place is serving in the royal stables until the day her magic runs dry.

All that changes when the ailing ruler invokes the Crossing: a death-defying race across the desert, in which the first of his heirs to finish—and take the life of a human sacrifice at the journey’s end—will ascend to the throne and be granted unparalleled abilities.

With all of the kingdom abuzz, Zahru leaps at the chance to change her fate if just for a night by sneaking into the palace for a taste of the revelry. But the minor indiscretion turns into a deadly mistake when she gets caught up in a feud between the heirs and is forced to become the Crossing’s human sacrifice. Zahru is left with only one hope for survival: somehow figuring out how to overcome the most dangerous people in the world.

The Kinder Poison was a refreshing read. I’m glad it wasn’t another typical YA fantasy novel. I enjoyed every aspect of the book. The characters, the plot, the world building are well done. I think it was a fantastic debut and really loved that purple cover. The story was filled with adventure, magic, royal politics, and sibling rivalry.

Since young Zahru wanted to leave kingdom of Orkena and go on adventures like the ones she heard in stories, but as a lowly animal whisperer she could only serve in the royal stables. When she learns that the ailing ruler has invoked the Crossing: a death-defying race across the desert, Zahru and her best friend Hen decides to sneak into the palace by claiming as the upper class citizen. Their plan backfires on Zahru, when she gets chosen for the competition to play beside the royal heirs. When her secret is finally revealed, she becomes the human sacrifice in the race and gets caught in the feud between three royal siblings. Zahru has no one but herself to depend on, and she must find a way to escape the race.

I absolutely loved Zahru! Even though she doesn’t have strong powers like others, I admired her strength and determination. I really enjoyed her character development. The secondary characters were also pretty good. We have three royal siblings Jet, Kasta, and Sakira. Each of the siblings has their own personality. Jet is charming, fun, and a total gentleman. He wasn’t interested in the throne but he’s forced to enter the race. Next we have Kasta, the complicated sibling. He’s a broody type of prince who doesn’t trust anyone. And he’s also very jealous of his brother Jet. He’s an intriguing character. And next we have Sakira, the fun and party type of girl but also ruthless when it comes to winning. Jet and Sakira are close to each other but Kasta is kinda like a loner in the group. I also liked Zahru’s best friend Hen, and the demon shifter named Maia.

The plot was entertaining and adventurous throughout. I really liked the concept of the race. Zahru gets to travel with the three heirs and my favorite part would be when Zahru was with Kasta and his demon shifter. He’s a morally gray type of character. Zahru tries to understand him, but Kasta doesn’t trust her. He believes that she’s spying for his brother Jet. I honestly wasn’t surprised to find a triangle in this book. I have so many thoughts about it, but I don’t want to spoil things for you guys. The pacing was perfect and loved the writing style of the author. It’s too bad it doesn’t have multiple POVs. I really wanted to know more about the three royal heirs. I quite enjoyed the world building and the magic system. I hope there’s more magic in the next book.

Overall, It was a great start to a new series. I enjoyed every minute of it. The book obviously ends with a shocking cliffhanger  and I can’t wait to know what happens next.