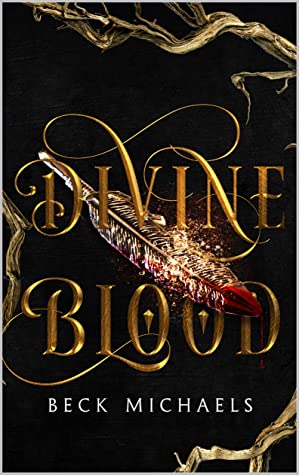 The Shadow demon nearly took everything from Dynalya Astron, and it would soon return for more. When she discovers a way to fight back, she must go on a perilous journey and risk it all for those she holds dear.

Along the way, she meets Cassiel, a Celestial Prince with magic blood and wings as black as his heart. He wants nothing to do with Dyna until he learns she could lead him to a place he has been searching for all his life.

But reaching their destination is not as easy as they thought, nor are they the only ones who search for it. With danger at every turn and harrowing secrets between them, the quest will require much more than determination. They must fight for what they desire—or die trying.

Divine Blood was an amazing debut and one of my favorite reads of 2020. I don’t know why people aren’t talking about it. It was a rare gem. Every aspect of this book was well written. I’ve had my fill of demons and angels books, and I found this very unique. I can’t believe it was the author’s debut novel. She has done a great job with this book.

Dynalya Astron lost her family to the shadow demon and it would soon return for more. When she discovers a way to fight back, she sets for an epic journey to find a magical artifact that can kill it. Along the way she stumbles upon Cassiel, a Celestial Prince with magic blood. He saves her from being killed because humans are forbidden to enter in their land. Cassiel isn’t interested in the human being until he learns that she has the map to a mysterious island that he’s been searching for years. Along with her cousin Zev, and Prince Cassiel, Dyna continues her journey facing many obstacles including dangerous enemies who wouldn’t hesitate to kill.

I loved Dyna! She’s brave, strong-willed, and naive. Although I enjoyed her character, she made some dumb decisions that frustrated me. Prince Cassiel is an intriguing character. He’s complicated and broody. My absolute favorite. Coming to the werewolf Zev, I really enjoyed his character. He’s another complex character who’s fighting with a madness inside him. I wish I could hug this guy. And finally we have Von. The morally gray character who’s on the bad guys team. He’s a supporting character but really a good addition to the plot. We’re also introduced to some more interesting characters like the Elf Lord named Rawn and the mysterious witch named Lucenna. Can’t wait to know more about them in the next book.

The plot was well written and engaging filled adventure, magic and a dash of romance. The story had me captivated from the very beginning. The pacing was perfect. There’s not even a single dull moment. It’s mostly a character driven story, but I still enjoyed the ride. I loved the idea behind the epic quest and the whole guardians thing. I can already predict that the next book is going to be even more amazing. For a debut, the author’s writing was pretty good, It’s simple and easy to understand. I’m glad it has multiple point of views. The world building was great. I enjoyed the world of Urn. There are different types of magical creatures in this world like Angels, werewolves, witches, mages, elves, and minotaur etc. I seriously can’t wait to explore more of this world.

Overall, it was a fantastic read! I enjoyed every minute of it and the ending left me wanting for me. Yes, the book concludes with a cliffhanger and I’m very much desperate for the next book.

I highly recommend this book to all the YA fantasy lovers who’re looking for something unique! Don’t miss it guys!