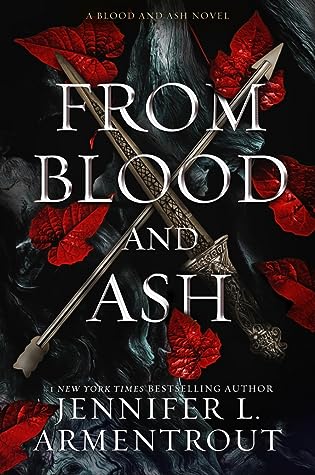 Chosen from birth to usher in a new era, Poppy’s life has never been her own. The life of the Maiden is solitary. Never to be touched. Never to be looked upon. Never to be spoken to. Never to experience pleasure. Waiting for the day of her Ascension, she would rather be with the guards, fighting back the evil that took her family, than preparing to be found worthy by the gods. But the choice has never been hers.

The entire kingdom’s future rests on Poppy’s shoulders, something she’s not even quite sure she wants for herself. Because a Maiden has a heart. And a soul. And longing. And when Hawke, a golden-eyed guard honor bound to ensure her Ascension, enters her life, destiny and duty become tangled with desire and need. He incites her anger, makes her question everything she believes in, and tempts her with the forbidden.

Forsaken by the gods and feared by mortals, a fallen kingdom is rising once more, determined to take back what they believe is theirs through violence and vengeance. And as the shadow of those cursed draws closer, the line between what is forbidden and what is right becomes blurred. Poppy is not only on the verge of losing her heart and being found unworthy by the gods, but also her life when every blood-soaked thread that holds her world together begins to unravel.

It’s been a very long time since I’ve read J. Lynn’s book. She’s one of my favorite authors. When I saw this book, I couldn’t wait to dive into it. The story was sexy and action packed. It was a good read but it wasn’t my favorite. Some of the aspects were easy to predict if you’re already familiar with paranormal romances. Personally, I’m not fan of the characters, but It doesn’t mean that I hate them. I really enjoyed the hate to love thing going on between them.

Poppy is a naive maiden who never had a say in her life. She’s forbidden to socialize with others and she don’t have friends except for her maid Tawny. I felt bad with Poppy’s situation. She isn’t actually my favorite protagonist, but I did admired her fierceness and strength. Coming to the golden eyed Hawk, I have mixed feelings about him. He’s kind of an anti-hero and his twisted behavior towards Poppy at the end was creepy and disturbing. I didn’t find that part sexy at all. I hope the next book will make me warm up to him. The romance between Poppy and Hawk was filled with lots of angst and sexual tension. J. Lynn never fails to impress me in that aspect.

The plot was interesting but I easily predicted most of the twists. There’s also some info dumping parts which slowed down the pace and this book is LONG. A little too long in my opinion. As always, the author has a captivating writing style. I enjoyed Poppy’s POV but I wish there was also Hawke’s POV in the book. I hope the sequel has dual POV’s. The world building was good but not great. It’s a decent medieval setting with vampires and werewolves. However, I’m still looking forward to explore more of this world.

Overall, I liked it! It was a good start to a new series. I had a couple of problems but for the most part, I was really into it. Can’t wait to read the next book!

I would recommend this book if you’re into Paranormal Romances!