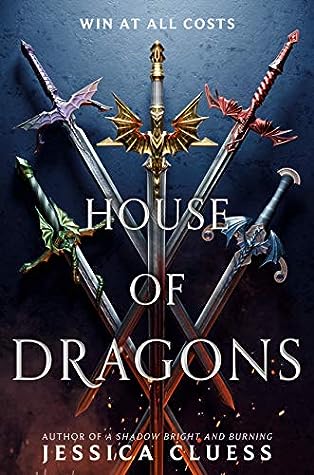 Five royal houses will hear the call to compete in the Trial for the dragon throne. A liar, a soldier, a servant, a thief, and a murderer will answer it. Who will win? Think THREE DARK CROWNS meets THE BREAKFAST CLUB with DRAGONS.

When the Emperor dies, the five royal houses of Etrusia attend the Call, where one of their own will be selected to compete for the throne. It is always the oldest child, the one who has been preparing for years to compete in the Trial. But this year is different. This year these five outcasts will answer the call. . . .

THE LIAR: Emilia must hide her dark magic or be put to death.

THE SOLDIER: Lucian is a warrior who has sworn to never lift a sword again.

THE SERVANT: Vespir is a dragon trainer whose skills alone will keep her in the game.

THE THIEF: Ajax knows that nothing is free–he must take what he wants.

THE MURDERER: Hyperia was born to rule and will stop at nothing to take her throne.

This book was so much fun to read. When I first heard about this book, I was freaking excited because I love dragons and after reading the blurb, I was sold. I’ve never read anything from this author, so I don’t know what to expect from this book. Although I had few issues, for the most part it was an enjoyable read.

This book has five perspectives Emilia, Lucian, Vespir, Ajax, Hyperia. Emilia is from the house of Aurun. In her family, her oldest brother is the only one who cares about her. She’s a chaotic, a dark magic that brings chaos and destroys everything. Her dragon is Chara. When Emilia gets selected to compete in the Trial for the dragon throne instead of her brother, she’s afraid that her secret might come out. Lucian is from the house of Sabel. He was a soldier and he’s ashamed of all the bloodshed he has done and he’s sworn to never lift a sword again. He’s like a soldier monk. His dragon is named Tyche. Vespir is from the house Pentri. Unlike others from the group, she’s not a royalty. She’s a servant and also a lover to the noble daughter Antonia. She’s pretty much skilled in understanding dragons and also a good dragon rider. She has a deep bond with her dragon Karina. Ajax is from the house of Tiber. He’s the youngest bastard child.  Everyone treats him like a kid and it infuriates him that no one takes him as much of a challenge. He has a goofy dragon named Dog who acts more like a dog and less like a dragon. In the trials, he wants to prove himself by winning the dragon throne. And last but not the least, Hyperia is from the house of Volscia. She’s the eldest daughter. Since she was born, she was trained to rule and she wouldn’t hesitate to eliminate anyone who comes in her path. Her dragon Affidious is powerful than others.

All the five main characters in this book has distinct personalities. At the beginning, I was only interested in Emilia and Lucian, but as the plot progressed and we come to learn more about the other three main characters, I started to like them too. The dragons also have their own personalities and my favorite was definitely Ajax’s dragon, Dog. He’s so loyal and adorable. He might be not as strong as the other dragons, but he was a total sweet heart. Coming to the relationships, I enjoyed the slow burn between Emilia and Lucian because I’m a sucker for forbidden romance.

The plot was entertaining for the most part. There’s some power play and political games. The stakes weren’t high enough at the beginning, but things take a dangerous turn at the end. Everyone has a single goal for the throne, but they’re all fighting their own battles too. The first half might seem a bit slow, but the second half was amazing. Things get intense after every secrets, lies, and betrayals are revealed. There are so many twists and turns, but the one at the end was predictable. I’m not fan of the writing style. It was just okay. The book was written in five POV’s. The world building sounded interesting, but it wasn’t clear enough for me. I hope we get more info in the next book.

Despite issues, I enjoyed this book especially the dragon part. There’s no cliffhanger at the end, but I can’t wait to know what the author has in store for us next.

I highly recommend this book if you love DRAGONS!